This is something we usually pray over our breakfast every day. And more than once in the past 5 years I have lived on the dairy, I have been thankful that the Lord hears our prayers.

Today was a great example of that. It was about 1 pm and hubby comes in the door and announces that I almost became a widow this afternoon. Hmmm...

He went down into the creek bottoms to get a load of firewood. The road back up is very steep and, after the recent rains, very muddy. Something went wrong with the little Oliver tractor; he started slipping backwards, the clutch started slipping too, and it just kept going backwards until it was jack-knifed. The wood trailer was up on top of the tractor, which was tipped over. Here is what it looked like initially: 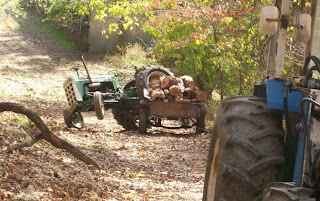 It could so easily have gone straight over on him. We brought the other tractor down and tried to pull the Oliver out from under the trailer. It just wouldn't work because the trailer was wedged on the back wheel of the Oliver. This is what that looked like: 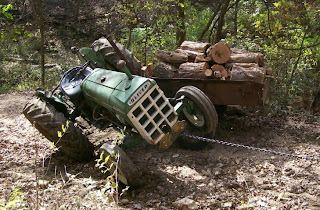 Then hubby tried to push the trailer off of the tractor, using the hayspike. But that wouldn't work either. You can't really see in the pictures but it's right on the edge of a little ravine. But as he was pushing at it the whole shebang started slipping and over the embankment it went. I nearly cried. The poor Oliver: 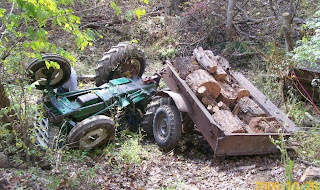 He shook his head, looked at it a bit, then went and got the battery out of it and looked at it again. One of his first comments was; "That's a pretty good hitch." 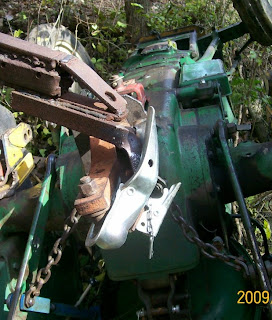 The perspective is kind of weird in this photo, but if you look closely you can see that this is the belly of the Oliver and the hitch is bent clear back over to the left, that is the trailer tongue over on the left.

Anyway. An hour later the Oliver, a bit battered with the hood and radiator skewed a bit, was up on all fours again. Somehow he used the bulldozer to get it righted. The steering wheel wasn't even bent. He can't start it yet because the fan would hit metal, but once that's adjusted it'll be hauling wood again. Maybe not from the creek bottoms though...
Posted by Calfkeeper at 8:00 PM

yup, I do belive he heard ya today!

now that i know he's ok,
i will ask ya this, is ya going to have to buy some new jeans? :)

I pray that daily myself....good to know that He is really listening.

Ok...I can breathe now....Poor Gary. He loves his old equipment and takes good care of stuff. The thing is, this is exemplary of how farm accidents happen! We all know farmers who died from just such an incident! Whew! That was a close call!

Oh my! Thank goodness your husband is okay. The pictures had me cringing. I called my husband over to read this post with me (he's a farmer too, so he likes farm blogs). He kept nodding and "uh huh"-ing through the post...and then he said, "That's a nice tractor!" What a guy!

I pray that daily as well and every time Hubby goes out into the field, I always tell him, "Be safe".

jel-ha ha you are funny. You aren't the only one who asked that. :-)

anony-Yeah, it's always those little things you have done a million times that can turn on you in a second and bite you. He does take great care of his things and now that I know he's OK, it is hard to see the tractor in such shape.

C-your husband cracks me up. It sounds like what mine would have said.