My mom was born in 1929 in Blackshear, Georgia.  Her family moved to S. California back in the mid-30s in search of work.

When she was in her late teens or early 20s, I am not sure and she probably doesn't remember either, she got a job at a fish cannery down there.  Yeah, she worked in Cannery Row.

She can still tell tales of being called in the wee hours of the AM to go to work at the cannery because a fishing boat had come in to port.  She remembers about the gutters and the packers and how they had to put the fish into cans and send them on down the line.

She was a packer, I believe.

She remembers the stink of the fish.    Not even dementia can take that memory away.  Haha

When I was growing up on the coast of Northern California; Humboldt County I distinctly remember that even though we were on the coast where fresh fish was readily available, it was rare that we had it.  My mom's memories of the stink of fish in the cannery overpowered any reason to actually prepare the stuff for her family.  And I can remember quite clearly the only instances we actually had fish.

In the summers, from when I can first remember things up until I was maybe 8-ish, my uncles would come up to visit us.  Then they and my dad would suit up in hip-waders and take a surf-fishing net and head to the beach.  They would look so remarkably like the man in this random photo that I got off the 'net through Google, that it gives me a bit of a turn to look at it.  (This looks so amazingly like a spot there on the Humboldt Coast that I am going to have to go back and research this photo.  It was captioned; "Grandpa and fishing net") 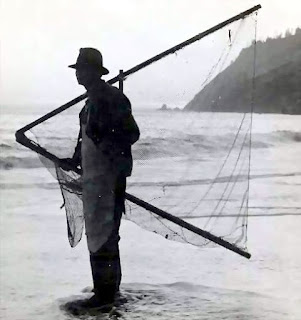 Anyway.  If they had a good day fishing we would have buckets and buckets of small silver fish to process.  I can remember all of us taking a hand in beheading and gutting these weensy fish.  Then my mom would heat up the grease and coat and fry them.  I remember, even as a kid, they were the BEST.  We would freeze bags and bags of them to enjoy later.

I also remember that occasionally someone would give us a salmon.  Mom would usually bake it.  Those were yummy, too.  Except there was one time that someone gave us a salmon that had been upriver for too long or something because it tasted EXACTLY like a mouthful of mud would taste.  GROSS.  Mom would eat the salmon, but I don't think she ever enjoyed it much.

And we ate breaded fish sticks from the store.  We had these quite often and I think that was because a fish stick from a cardboard box is so far removed from the real thing it barely has any smell let alone any resemblance to an actual fish.  My mom could stomach them.  Ha

We also, for some obscure reason seeing as how she didn't like canned fish, had a lot of canned tuna.  I did not grow up on peanut butter and jelly; I grew up on tuna fish sandwiches (w/ real mayo and dill pickles and lettuce) and chocolate milk made with the powder from a can.

There was one time; ONE time only, when we were given a couple of fresh crab.  My mom had NO CLUE how to prepare them or what to do with them.  I remember vaguely they were boiled in an enormous pot she drug out of the back of the cupboard and then we tried to eat them.  As I recall we had little idea which parts of the crab to eat and what I tasted was so disgusting I have never had it again.

And that was the extent of my experience at home with fish.  I have VERY VERY VERY VERY rarely even cooked the stuff at all in my adult life.  With the obvious exception of tuna fish burgers....from a can of course.

Now Gary?  Gary loves fish!  He and his family used to go fishing here on the Niangua quite frequently; mostly every week in good weather.  They ate various sorts of fish all the time.

And now from time to time we are given fish from neighbors and friends.  The first time we were given fresh fish I had no clue how to fix them.  I recall I ended up serving breaded half-raw fish to my husband.  He was a good sport about it; he usually always is, and told me how to actually make sure they are done.  LOL

So when a friend this past summer gave us fish we had a fish fry.  That time my sister-in-law fried it up.  But  we still have some in the freezer.  So Gary had been pestering me to thaw it out and cook it.  So I finally did here a couple of days ago. 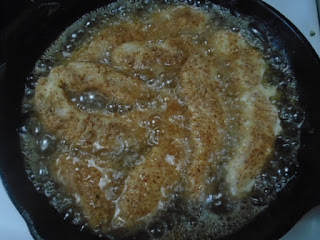 This actually is spoon bill; given to us by a different friend than gave us the fish fry fish.

I used almond flour and seasonings for this spoon bill, fried it up just right and it was DEE-LISH.  Even Ellen liked it.  We didn't have much leftover.

(Thankful for: Generous friends, free food, something different for supper)

Posted by Calfkeeper at 8:03 PM No comments:

The Faerie Spring in Winter

The Faerie Spring is an enchanting place to visit in the spring; flowers, laughing water, fresh green leaves whispering in the wind, cheery birds...you get the picture.

But the past couple of years since I discovered it, I have wondered what the Faerie Spring is like in the winter.

This past week Bella and I took a long walk to find out.  I had piles of laundry to do, but I took one look into those brown eyes and went to get her lead.

We trekked on down there. It was well below freezing, maybe in the mid- to lower-20s.  But interestingly enough at the head of the spring the water was yet flowing freely.  The leftover leaves of fall clogged the flow, and the mossy rocks were a determined green; so it was still a wee bit enchanted. 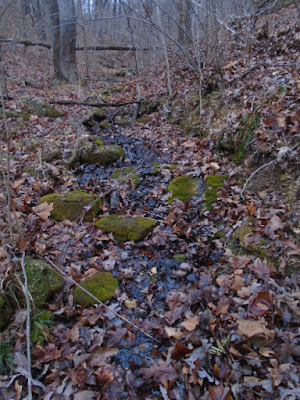 We went further down, finding evidence of how life is hard in the wild.  This fellow didn't make it to see another year. 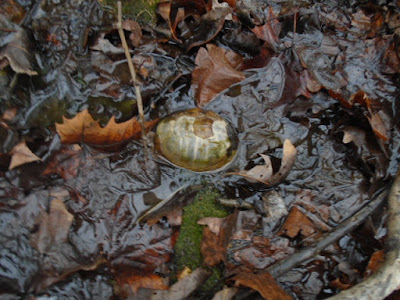 As we went on we saw white ahead.  Random patches of ice. 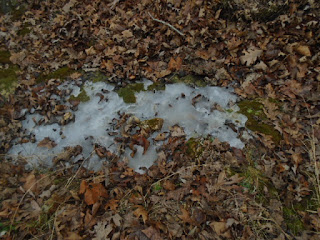 Then long stretches of ice, leading off into the distance. 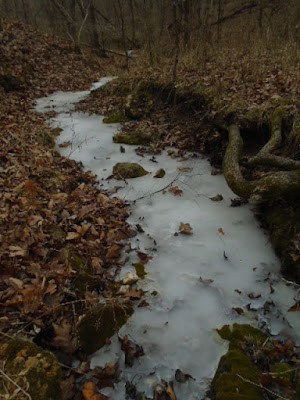 Instead of water swishing on by them, each rock, each leaf, was hugged in an icy grip. 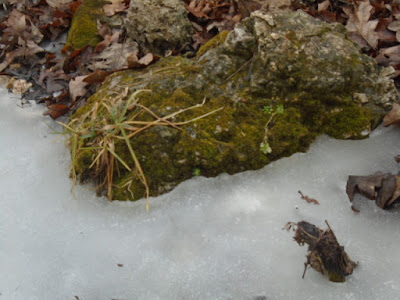 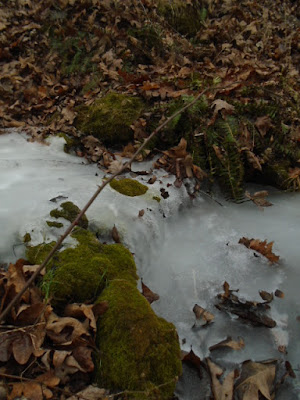 Further down the spring, the waters springing from below ground carved a stream through the ice; a living spring within the dead one. 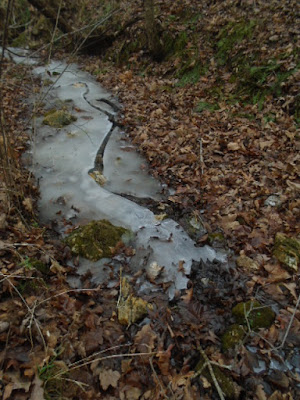 Bella would trot and frisk around but would occasionally pause, puzzled, and gaze into the treetops, looking for her frenemies the squirrels.  She never could find any and she was quite frustrated at their lack of adventure to come out where she could see and chase them. 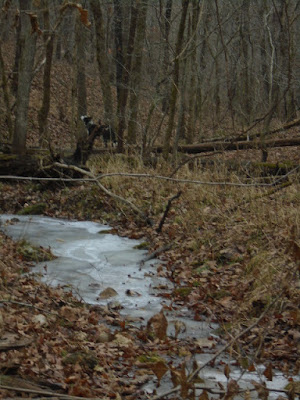 There was plenty of deer sign though; here is a shot of a pointy deer track in the leaves.  It is hard to see down inside of it, but it is there. 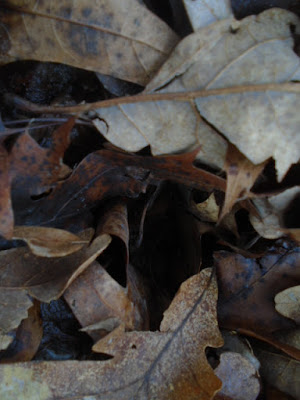 Perhaps, given the time and chance, we will visit the Faerie Spring during a deep snow.  That would be interesting too.
Posted by Calfkeeper at 2:15 PM No comments: