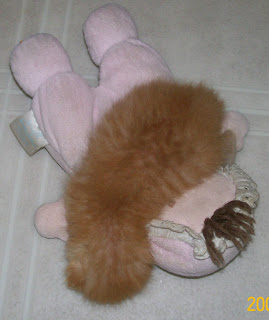 It has been dreadfully neglected this month. I plan on trying to rectify that in Oct and Nov and do some NaBloPo-ing, if I can. Probably won't make it every day, but will try.

These kittens are about to drive me batty. Against all the odds they have survived and are growing. The gray one is the cute one, the orange one is rather homely. I have had my doubts that she would survive at all, but she keeps hanging in there. That is her with Ellen's dolly up there. Ellen tossed her doll down when she was playing by the kittens and the orange one found it and went to sleep on it. Keeping them clean is a full time job in and of itself. And feeding them is a pain too; literally. Their claws are like little needles. But I still have to say they are easier to bottle feed than calves, at least I don't have to wrestle them around.

Last week I made a batch of green tomato relish. I think it turned out OK, but time will tell. It contained green tomatoes, onion, sweet peppers (you could use hot but I didn't), and cabbage, along with various spices.

This week I am going to finish digging my sweet potatoes. I dug most of the patch on Saturday and got well over a 5 gallon bucket. They sure look really good this year; even if the deer have been helping themselves to the new leaves on the vines.

That's all for now.
Posted by Calfkeeper at 1:21 PM No comments:

It often gets me into all kinds of trouble.

This morning on the way back from feeding the cows up the road I spy something weird in the middle of the road. I straddle it with the 4-wheeler and then back up. It looked like a little rodent; gerbil or hamster. Nope. It was a kitten. I scooped it up and came home. Showed it to hubby. He says, "Were there others?" I honestly didn't even think about it. Went back. Yep, one more.

So now I have 2 week old kittens to raise. Ellen loves them.

Would anyone like them? I'll throw in the milk replacer and the bottle for free.
Posted by Calfkeeper at 8:14 PM 2 comments: 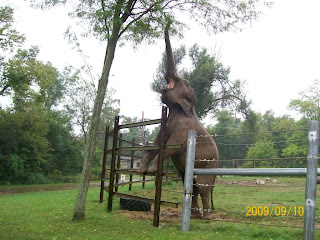 It's been so long since I have blogged. I feel out of practice. I have had trouble logging in the past couple of times so I just backed out of it.

Today hubby and I took off to Springfield and took Ellen to the zoo. We got rained on a bit, but still had a good time. I think Ellen liked feeding the fish the best. They have this huge pool with bridges and such, with enormous carp swimming around. They hear the little feed dispenser clicking and they come swimming up to the side there. Ellen didn't want to get TOO close to them, so she'd toss the feed pellets from a ways back. But she'd giggle to watch them with their pink mouths gaping above the water. Then this spoon-billed pelican had to get in on the act. He wouldn't eat the pellets, but the fish swam a distance away from him, though they were much too big for him to scarf down.

While it rained we took shelter in a little lean-to like structure in front of the tiger paddock. It made me think of "Jurassic Park" and I was thankful that we weren't in front of the T-Rex paddock. Ha!

We petted the goats a bit, though Ellen wouldn't have anything to do with them. And we said hello to the giraffes, but were too cheap to buy food to feed them.

One of the elephants decided to put on a show for us by trying to tear down a tree branch near its pen. Apparently they don't keep elephants in there much, else the tree would have been pruned much sooner than this.

My favorites are those humongous tortoises, from some island off the coast of India I believe. I should've got a pic of them. Hubby says he's glad none of them live around here because they'd really mess up your car if you accidentally hit them while driving down the road. Much to my delight one of them actually picked itself up and lumbered along for about 6 feet. They look like they are made out of some sort of plastic.

Once again I was disappointed because the kookaburras didn't laugh for us. Maybe next time.
Posted by Calfkeeper at 2:36 PM 1 comment: