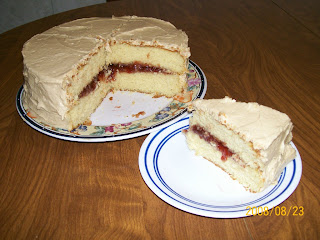 It's been too long since I have posted. But here's a pic of my latest accomplishment. Actually I have made this cake before, but have never had it turn out this nice. Usually when I make a peanut butter anything it turns out too dry and crumbly, but I added an extra egg to the recipe and it turned out much better. It's peanut butter and jelly cake (the orig recipe called for grape jelly as the filling, but I used strawberry jam) with peanut butter frosting; all from scratch. If anyone is interested in the recipe I will post it, just let me know.
Other news:
We got more peaches from aunt, but I froze them this time.
We've got two new heifer calves; both are doing well so far, which is a blessing. The second blind one I mentioned in an earlier post is actually only blind in one eye, and I think that is getting better. So that is great news too.
Husband built a porch for our back door this past week. It is really nice.
Ellen has reached the stage of throwing her plate of food on the floor when she's mad. Usually she's really good about handing it to us when she is done, but sometimes she gets upset and drops it over the side. I guess they all do that at one time or another.
We have a new dairy inspector; she's only 27 but seems really nice. We are just waiting to see if she is going to come every other month like her trainer did, or every 6 months like our regular inspector did. Hubby says things won't have a chance to get too dirty if she comes more often.
Posted by Calfkeeper at 3:55 PM 1 comment:

Under the Elephant Ears 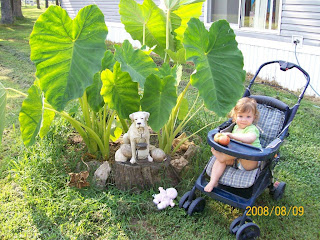 I haven't posted a shot of Ellen in awhile. Here is one I took a few days ago. I parked her under the elephant ears out back. 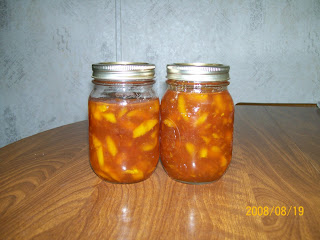 On Sunday hubby's aunt gave us a small bucket of peaches. So for the past couple of days I have been peeling and slicing them as I get a chance. This morning I processed a few of them into peach preserves. This is the first time I have ever canned any kind of fruit, so I am not sure how they will turn out. It's just peaches and sugar, so it wasn't that hard, in theory. However the recipe said they were supposed to foam, but they never did. I finally got tired of standing there stirring, so I just chucked them into jars. Obviously I need to learn how to distribute them evenly between the jars, but they sure smell and look good anyway.
Posted by Calfkeeper at 8:59 AM 6 comments: 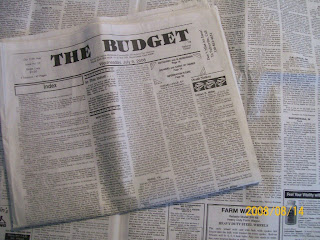 Last month in-laws went on a tour of Amish country up north of us. They brought back a copy of the Amish-Mennonite newspaper. It is published weekly and is a way for them to all keep in contact with each other. Every week each participating settlement sends in a letter that is published. They talk about their gardens, births, deaths, accidents, special events, barbecues...etc. It is fun to read because some of them are hilarious in what they chat about. One person told about how they have some 150 pairs of purple martins nesting on the place and how one has to be careful not to stand in the ummm...line of fire...as it were, when one of the birds is coming in for a landing. Apparently someone wasn't careful enough and got splatted.
Then someone else wrote about how a kid got chased up a tree by a rutting buck. Another detailed how they were flooded out during the big rainstorms up north.
Surprisingly enough they do quite a bit of traveling; some talked about trips across country or how relatives visited Australia or Belize.
It is rather sad, though, to read about their accidents; buggies getting hit by cars, or how their horses get wild and throw them, run off the road or otherwise create havoc.
Reading this paper gives one an interesting glimpse into a different way of life.
Posted by Calfkeeper at 1:50 PM 2 comments: 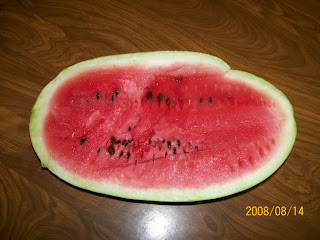 AHHHH!!! What other sound personifies the soul of mid-summer than the juicy splitting of a ripe, red watermelon?! The mythical ambrosia of the gods could not taste better! Yum, yum! And what could be more fun than the "PHTHOOOEEEE" of spitting out the seeds?!

This particular watermelon came from my mother-in-law's garden. Hubby came lugging it in this morning and nothing would do 'til I got the knife and whacked it open. You should have heard our cries of satisfaction to see this ruby-red baby. The smell is also almost intoxicating. Homegrown, no pesticides, and absolutely free!
Life in the country! What can beat it!
Posted by Calfkeeper at 2:38 PM 2 comments: 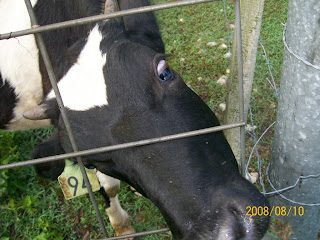 Here is a picture of the original blind calf from last August. She appears healthy enough and is fat and sassy, but if you look at her eyes you can see she has what appear to be gray cataracts.

Every time she gets a wound of some kind it seems to get infected, so I think her immune system was compromised. I am dreading what might happen when she gets dehorned, but so far she seems to have fought off any serious illness.
Hubby keeps saying he is going to try and slip her into a batch of calves we are going to sell, but he hasn't decided to sell any yet.
Posted by Calfkeeper at 9:03 AM 2 comments: 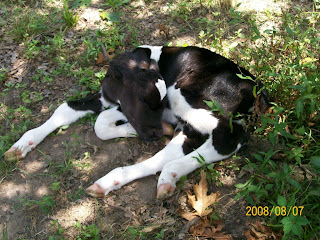 This is kind of an on-going thing here which I have hesitated to post about, but since my first blind calf story is still getting comments off and on, I thought I would put this in here as well. Apparently this isn't as odd as I had thought it would be; people keep Googling and finding my blind calf story and adding their own. For this reason I have added the story to my list of interesting posts.

On Thursday the 7th, I believe it was, I went up to check on the dry cows and one had a tiny little heifer calf, she was so cute. She was sitting up looking around, she looked like she had tried to stand, but she was still kind of damp. I went and checked on another cow that was in labor, but nothing there. Later that afternoon I went back; the second cow had a nice bull calf, and the heifer calf was still in the same spot, though the mama cow had gone off into the trees. This isn't unusual; mama most always comes back to her calf. She'd cleaned it up so I know she hadn't abandoned it, or so we think. Since hubby was busy that day we left the calves and cows there 'til next day.

Friday when we went to get them the heifer calf was on her side and appeared to be dead, just like the first calf. She was breathing however, so we brought her back and I thawed some colostrum to feed her. She drank part of a bottle that AM, and I fed her the rest later that afternoon. That night she drank another little bit of a bottle and I managed to get her to stand on her feet.
Saturday AM hubby said she appeared to be dying, her nose was cold and she was pretty limp but I tried to feed her anyway. She drank maybe a quarter of a bottle. Then by that afternoon hanged if she wasn't standing on her own!
But somewhere along the way I noticed that her eyes are cloudy and she keeps them closed most of the time, I don't think she can see at all. She can hear because she twitches her ears when she hears me coming, but she doesn't blink when I wave my hand in front of her eyes.
Every time I go out there she seems just faintly stronger. This morning-Monday the 11th-she stood up by herself, it was kind of a wobbly effort, but she got up on her feet.
It's all just kind of weird that this has happened again within a year. The first blind calf was born August 15th 2007, I believe.
Posted by Calfkeeper at 8:38 AM 1 comment:

Here is a recipe someone posted on a food forum I visit occasionally. This is actually one of a series that was posted. She had found them on some other forum. It's a great example of mis-translation into English. I love it. I should have posted this last month for food NaBloPoMo but just ran across them. What I wonder is how far you hurl the eggs....

In a container we hurled egges, later the oil, the sugar, the flour glasses and finally you exceed them of leavening. We mixed all mixed good. In the mold we hurled a little oil and we greased it well by all the container, later we hurled one little flour well and also we greased it in the mold but with care. Finally we put the mass in the mold and we put it in the furnace to 170º degrees.
entrada de angela a las 12:49 0 comentarios Vínculos a esta entrada
Posted by Calfkeeper at 9:11 AM 4 comments:

It has been hot here the past few days; the past week or so in fact. Too hot to do much of anything.

The theme for this month's NaBloPoMo is "hot," and I guess that is highly appropriate for August.

It's too hot to think of any more reflections on being 40. I forgot to check what number I am on anyway. I tried to post on Sat, but lost the whole blame thing. I gave it up because the baby was fussing. She is teething.

It's too hot to think of anything funny to write about even. We did a big switcheroo with some of the animals one day last week. Took 4 out of the heifer pen; two old cows that hubby is going to get rid of, and two springers that are almost due to calve. I surely wish you all could have been there to watch the bull pull his antics. He bellowed and slung his head around with his tongue hanging out, slinging spit everywhere. He'd rub his face in the dust and do more bellowing and spit slinging. Some day I am going to try and record him and post it on YouTube. That'd be funny. Ha. Anyway, then we put two new open heifers in the with the bull to be bred, maybe that appeased his temper.

Yesterday and day before we moved little calves around. It's funny when you've got one on the rope, they bawl and cavort and head for anything they can bust their heads against, seems like. I ought to get a shot of myself doing that as well.