"There aren't any more Indians...are there?" 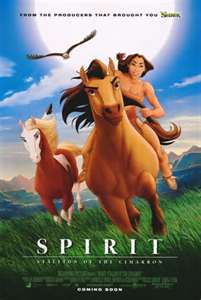 When we first got it, a few months ago, she wasn't very impressed with it; if you have seen it you realize that much of the interaction on it is non-verbal.  The horse narrates the movie to a certain extent, but the horses do not talk to each other.  In that way it makes it a bit above a 5 yr old's enjoyment, although there are sections where Ellen laughs.

I haven't actually sat down and watched the movie through seamlessly; but Ellen has watched it enough and I have caught the majority of it to where I enjoy it, too.

But last night she surprised me.

After it was over she turned toward me and asked; "There aren't any more Indians, are there?"

This necessitated the discussion; "Well, Ellen, you have an aunt and an uncle who are Native American Indian."  And I attempted to explain in the simplest way I could the difference between 1800s Native Americans and modern Native Americans, but I dunno how much of it she took in.

At any rate, I knew exactly what she meant because I distinctly remember asking my father the same exact question back when I was about 8 or 9 years old.  And I equally remember his astonished reaction and his amusement; "But your brother and sister and their mom's family are all Indians!"  (This was my dad's first wife.)

And now, at almost-age-6 my own daughter has asked the same question.  And I have to wonder if somehow a youngster of these tender years can catch that same poignancy from this film.

Spirit gained his freedom and wild mustangs still roam free to a certain extent, but what about the Lakota?
Posted by Calfkeeper at 2:19 PM 2 comments: