Got about 3 inches last night. I don't have any pics of it. I am sure you have seen pictures of snow before. I put the little snowy heifer as my title picture. She's pretty cute. That was from the snow last week. Don't feel sorry for this heifer; she's got shelter she could get in to if she so desired.

Today we went down and got a close-to-calving heifer and brought her up with the dairy herd. You should have seen how frisky all the cows were. They were hopping around, snorting, tossing their heads, kicking up their heels. Just like kids on a snow day. They love the snow, as long as the temps don't get below zero, they do just fine.

Ellen hasn't clamored for a snowman this time. But when it melts enough to get sticky we'll try to build a big one.

Ellen has 2 imaginary friends now; Johnno and Jaynno. I hope you can figure out how to pronounce them from my spelling. My child WOULD choose unspell-able names for her imaginary friends. John-oh and Jane-oh. Why, I don't know. When she's playing with her little doll house, she calls the baby Clementine. Presumably she gets that from the song. At any rate it's hilarious to listen to her talking to her friends.
Posted by Calfkeeper at 3:00 PM 1 comment:

There aren't that many dairy things going on right now. Mostly it's just do the milking, put out hay, chop ice and try to stay warm. Actually, though, it has been above freezing during the day so there's no ice to chop. This is really nice. In 6 years I haven't developed the knack of chopping ice without getting ice chips and water all over me. Gary doesn't have this problem. He thinks I am weird. Maybe he has a technique that I have yet to learn. I dunno. I have never watched him chop ice.

Two days ago Gary took out the small stretch of fence back behind the house where the middle sized heifers are. Most of the wooden posts were over 20 years old and several were broken off. He drove in steel posts and I helped him put up cattle panels. They are so much better than barbed wire.

Now that Christmas is over I am back in the thick of teaching the teens at church on Wednesday nights. We have added at least one regular in the past 6 months, and there are 4-5 who show up occasionally. It's fun. They are a great group of kids. Now that it's the New Year I need to think up an event for them. They want to go bowling or ice skating. Or go to some place called Six Flags. We shall see.

A neighbor down the road has started up a business. He is calling it Timber Line Mobile Home Rentals. When hubby and I drove by and saw the sign we'd have fallen to the floor and rolled around laughing had we not been in the truck. This guy has been dragging in old decrepit single-wides and fixing them up to rent out for $200-250/month. One of them had been condemned down in Springfield. I kid you not. He's got 4 of them set up on his property up and down the road. He does fix them up pretty nice on the inside. And it sounds like pretty cheap rent. But keep in mind it'd be close to $400 a month, if not more, for heating. When it's 5 degrees out, you use a LOT of electricity to keep one of those things warm. And let's not even talk about cooling in the summer when it's 100 degrees out and you are in a metal cracker box. At least he does the mowing.

Anyway.
Posted by Calfkeeper at 2:10 PM No comments: 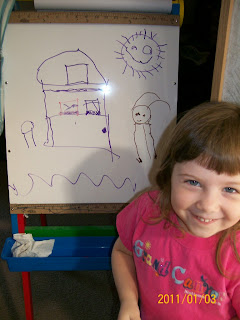 Here's the lastest photo of Ellen, and her artwork to boot. I think she does a great job for not quite 4 years old. I need to get her to do stuff like this on paper, so I can put it in an album for her later on. But she loves to draw on her dry erase board.

Allow me to interpret. This is a farm scene. You can tell the barn in the center.

The top square in the barn is the feed box. (She has seen the feed truck putting feed into the top of the milk barn.)

Lower lefthand square is the hen house. (We do not have chickens, but in every kid's book that has a barn depicted there's usually chickens in the hay somewhere in the barn.)

The mini silo is off to the left. (We do not have a silo, but she's seen plenty in our jaunts around the area.)

Wavy grass at the bottom.

To the right is a brown goat. Note the horns. (I was pretty impressed with the goat. This is the first picture of an animal she has ever attempted to do. We do not have goats, but for some reason she put one in her farm picture.)

A winking sun up top completes the picture. (She has just recently learned to make curved lines for mouths, used to be it was just an expressionless slash. Now, however, she will occasionally make an open-mouthed smile.)

Oh, and she has a doorknob on the righthand side of the barn, you can just barely see it.
Posted by Calfkeeper at 7:58 PM 5 comments: