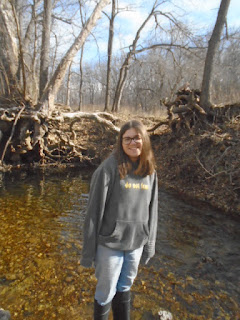 What winter here is complete without a walk to the creek and a picture of Ellen down there?  None that I know of.

I love how clear the water is this time of year.  There is still a thin layer of algae on the rocks, which gives it that gold/brown color.  Following in Ellen's footsteps as we waded in the water I could track her because everywhere she had stepped the rocks were gray; her boots had cleaned the algae off of the rocks. 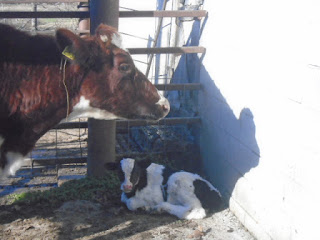 Ah ha!  About a week ago, Anne Shirley finally had her calf.  Now she is in the milking herd.  Her udder isn't much punk, as Gary would say, but maybe she will come on and do better next time.

Unfortunately her calf was a bull, so he is already gone on down the road.  He was, as you can see, black and white...a full Holstein.  I was hoping he would be a half beef heifer; but no luck.

Today, as our after Thanksgiving activity tradition, Ellen and I went Christmas tree hunting.

We were unsuccessful in finding one that we needed.  To avoid allergy issues we try to find a female cedar tree; one that has the berries on it.  The males tend to give off pollen.  You might say I am crazy to believe this; but every year...EVERY FREAKING Y EAR prior to two years ago we have had just any tree and Ellen had had extreme allergy issues in the month of December.

Two years ago we managed to choose a tree that had berries on it and; wonder of wonders, she didn't have severe winter allergies.  So we found another berry laden bush last year and the same lack of allergies happened.

This year we went looking for the same and were unsuccessful.  So we decided to try our fake tree this year.  I told Ellen that if we did the fake one we could set it up earlier, in early December instead of waiting until in the 20s of December to put up a real one.  She agreed.

But while we were out we stopped by and saw Anne-Shirley.  She is tamer than most of them; she will let us pet her face at least. 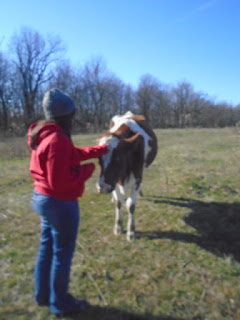 She is starting to spring; meaning she should have a calf in the next 2-3 months.  I am praying she has a decent udder because I don't think we could easily cull her.

Posted by Calfkeeper at 12:25 PM No comments: 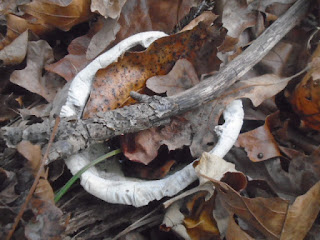 When I moved here to Missouri I was, and still remain, enchanted with the little terrapins, or box turtles that live here.  In spring and summer to mid-fall, depending on the temperature, they roam around at will.  They live their lives; generally up to 25-30 years, within a one mile radius of where they hatch.

They die for any number of reasons and their shells litter the forests floors all over.   In my first few years here I'd collect the shells and use them to decorate garden beds or whatever.  It is actually illegal to possess to many of them, or to sell them, or transport them out of the state.

At some point in the last few years I ceased collecting them, but just let them lay.  I have been tracking the above shell for the past year or so.  It is where I take Bella for longer walks.  At one point it was under a mossy log.  Then a month or so later it was under a small cedar tree.  That is where it has been for almost a year now.  But when I check on it every so often it usually has collected a few more gnaw marks from squirrels or other rodents.

So these shells are good sources of calcium and probably other minerals for wildlife.

This past summer it appears to have collected a stick and now a few fall leaves.  I am going to leave it as is and see what becomes of it later on.

Posted by Calfkeeper at 10:52 AM No comments: 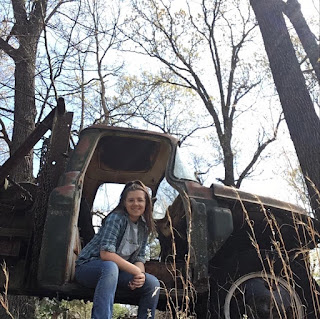 Posted by Calfkeeper at 5:13 PM No comments: