A couple of days ago hubby needed something for his dessert. I looked in one of my cake recipe books and found something new; a triple lemon cake. It required a box of lemon gelatin to be added to a lemon mix...then you are supposed to beat it for FOUR minutes. I thought that was excessive, but when trying something new I always follow as close as I can to the directions.

When the required time was up I looked in the oven and couldn't believe my eyes; it had really puffed up, almost to the point of running out of the pan. I took it out. I set it on the counter to cool. Regretfully, I didn't take a photo at that time. After all, how bad could it be? Hubby took one look at it and said; "It's going to shrink." "Yes," I said. I didn't want to watch.

I went back in an hour or so. This is what met my eyes: 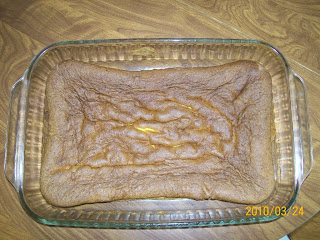 You can't really get a good idea of how ummm...short it is because of the perspective, but let's just say it's pretty flat, too.

Hubby took one look at it and said what was on my mind too.

No more gelatin in cake mixes for me.
Posted by Calfkeeper at 2:21 PM 2 comments:

Yesterday morning I was doing my regular graining of the young heifers when the strangest thing happened.

These are the 6 month to year old girls, close to the same size as the heifers below. Their feed bunks are on a bit of a hill that falls steeply off down into the creek bottoms. 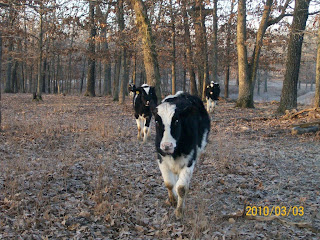 It was just barely light out, maybe 6:45 AM or so, and I had just opened the gate and was shoving my way through the 10 of them when suddenly something happened behind me (dunno what it was) and they all startled and went charging off around me. One of the smaller ones got so excited she tried to jump a feed bunk, landed smack inside it and flopped around like a fish out of water before she leapt out and took off in the rear of the herd. It was kind of freaky because I was afraid I was going to get trampled.

I had this brief and strange sensation that I was in that scene from Jurassic Park where the veggiesaurs were flocking around the professor and the two kids, and if I turned and looked down over the hill I thought perhaps I'd see the T-Rex coming after me.

But thankfully he wasn't there.

This week starts off with everyone in our household having a cold. Plus the temps have been in the 30s all weekend and we got some ice/sleet last night. Happy Spring!

I think it was Thursday or Friday that hubby put out the last of the alfalfa. Usually by this time there is at least SOME grass for the cows to eat, but not this year. Our production is gradually going down and at just over a buck a gallon for milk it's not a pretty outlook.

But on the bright side they are saying that the temps will be up to 60s by Tues perhaps. So maybe things will pick back up.

Sometimes Ellen just cracks me up. She hates having to take a nap. She will protest to the last minute, with her eyes barely open; "I don't want to take a nap!" So I tell her she doesn't have to. She keeps protesting and I tell her to go get on the bed. Then she howls to lay on the so-FAH. (And you must pronounce it like that, the Spanish pronunciation; so-FAH.) So she'll lay down, go to sleep and then wake up and hour later still moaning; "I don't want to take a nap."

I have a cold. This is the first cold I have had in close on 2 years. I honestly can't remember the last time I had one. I remember having one when I was still nursing Ellen, she must have been only 5 or 6 months old, or younger. And I think maybe I had one soon thereafter, but not much later. Since hubby quit driving the school bus we have hardly been sick at all. Something to keep in mind on the positive side to potentially homeschooling Ellen.

This weekend we had visitors from Oklahoma. The son of one of hubby's friends who used to live in the area here. He and his girlfriend came by to chat a bit. I think he was showing her around his old stomping grounds. What a charming couple. He's in his early 20s and is on his way through veterinarian school, with the goal of becoming a large animal vet. This is a field that is sadly lacking...most of the money is with small animals, people's pets. If you happen to find a large animal vet in the area...good luck in getting him/her to come out and help. Usually they are so swamped they can't appear until after your critter has already croaked.

We got into a discussion about people their pets. Hubby mentioned that he'd heard they actually do dialysis for pets...among other things. And the young lady stated as how they even do organ transplants and such. Then the young man said he was rather incredulous about how people were willing to spend money on their pets; the pets became like family and folks would go to any lengths for them. He said one lady spent close on to $12,000 on a stray kitten she'd found. It ended up dying anyway. And someone else actually MORTGAGED their home to pay for vet costs for their pet! Crazy! If I ever get really attached to a pet, I hope I have the grace to let it go peacefully instead of try and extend its life for my own pleasure.

On the other hand there have been neighbors here who've told us to go ahead and shoot their pets if they other our cows. I thought that was kind of cold, not to mention inconsiterate. If it's their pet, shouldn't they be the ones to keep it out of trouble? And why should WE be the ones responsible for destroying their pet? It's really annoying.

make me so ready for spring to come. Today we went to Lebanon and got most of the seeds we will need for our garden. I need to get some cucumber seeds, but I'll get those in Buffalo.

Ellen was determined to plant some seeds today. She watches Rabbit plant his radishes in his garden (on Pooh) so she wanted to plant something too. I opened the pack of cabbage seeds and gave her a few to "plant" in a hole in the flower bed. She was satisfied with that, although she got peeved when the leaves she'd covered them with blew away.

We are supposed to get some rain tonight. I hope we don't get much. I am so tired of mud, and said mud is just now starting to dry up in the dry cow corral.

Hubby has several graveling projects on hand; one involving grading of a driveway.

He also has to re-do the heifer corral, reinforce it actually, in order to catch the bull. Mr Bull has been here 3 years now, so he needs to leave so we can get a youngster in here.
Posted by Calfkeeper at 2:23 PM 1 comment:

If not twins, then at least brothers...

Yesterday I reported on Facebook that I'd found twin bulls in the dry cow field. It seemed to me that they both came from Fluffy, who appeared to have deflated like a balloon, though there WAS this other cow over there with them all.

I took my camera this morning and here they all are...two cows and two bull calves...Fluffy is the cow in the background, with the white face. 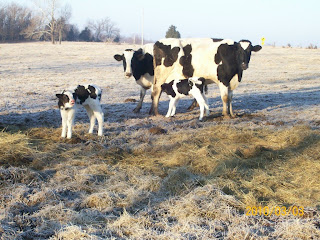 Weeeelll...later on hubby went up there today to get them and he begged to differ. For one thing they are both quite large. For another, he says that other cow appears to have had a calf, though she doesn't have much of an udder and wasn't due until April, which is why I assumed Fluffy had had both calves. So we don't really know whose is whose or what's up or who's on first...etc. But at any rate, they were both sired by the same bull, so they ARE brothers.

While I was up there, the other cow got nervous and took off with BOTH of the calves: 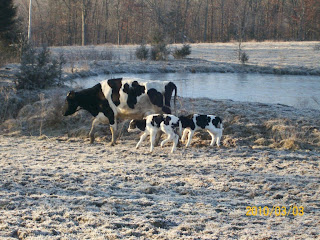 It is not uncommon for a cow to steal a calf like this. But Fluffy made sure they wouldn't get far without her and she followed close behind. 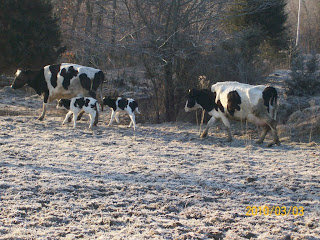 Ellen, how old are you? 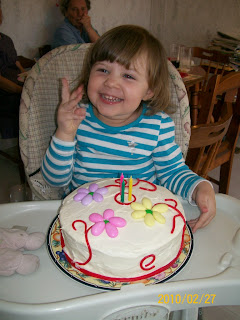 Ellen had a fine time at her birthday party on Saturday. She didn't eat much, due to too much excitement, but she loved most everything she got. At first she wasn't sure about opening the presents, but by the third one or so she was really into it.

I say that she liked MOST of her gifts because there was one she DIDN'T like at first. Her MO aunt got her one of those really tall dolls, almost as tall as she is, and when you set it on the floor and move it just right it appears to walk. Her grandma did that and Ellen freaked out! Wouldn't have anything to do with it and left the room until it was out of sight.

But by the next day she'd warmed up to it and was playing with it. (Thank goodness!)

She only got two books, which was nice, as she already has a full library of them. But two new books were nice as well. It gives ME something new to read.

Ellen didn't want me to take down the decorations, she wanted her birthday to last and last. Someday she'll grow out of that one, I suppose.