OK. To begin where we left off. After we saw the demons cast out of the crazy man we went putt-putting over to do the traditional tug of war; which represented the battle between good and evil. This picture is the losing side, and ironically enough that would be the real and bonefide County Sheriff as the anchor on the losing side. He picks his sides much better in real life, rest assured of that. 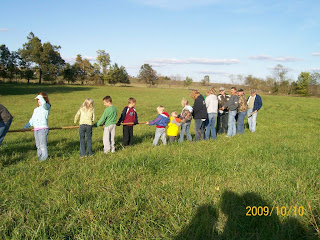 After the evil side was defeated; twice, just to be sure they were trounced good and proper, we went to where Saul and Stephen were hanging out in one of the back pastures. Saul was happy to have us show up so the kids could help him stone Stephen with the bucket of black water balloons sitting conveniently at hand. Of course the kids were happy to comply. And Stephen, played by one of Ellen's cousins, was a good sport because despite the sunshine, it was very cool and windy that evening. However, I managed to catch a picture of Stephen apparently losing his cool and hurling a "stone" back at someone. This is actually very funny because he is the nicest, most laid-back guy in the church, and to catch him looking mean is a rare thing. 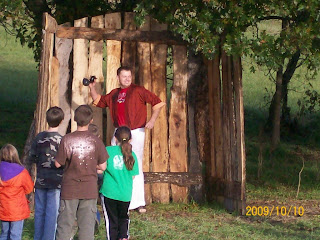 Once Stephen was soaked good and proper we loaded back up again and headed off to the pumpkin patch. The host family actually grows these, along with little decorative gourds for the kids to take home every year. Ellen was quite proud of her prize and nearly had a fit when I set it down to pick up a couple of gourds. She insisted we carry her pumpkin in our laps the rest of the ride. 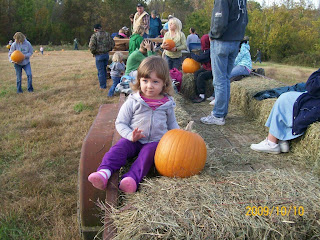 After getting pumpkins we headed off to the actual fish fry. It was very nice and everyone contributed something, so there was so much food there. Afterwards, for the younger ones, they had a "Candy in the Haystack" scramble. They had 2 different piles of hay that they hid candy in. Each child was given a small paper sack and on the count of three they all dove in. Ellen was too shy to do that, but she got some of the candy, snagged by a couple of caring adults. 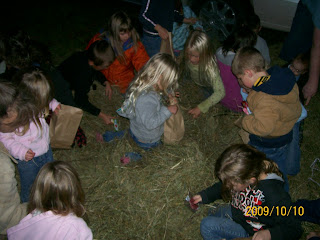 All in all we had a wonderful time and are looking forward to next year already.
Posted by Calfkeeper at 1:19 PM