March 11, 2008
It isn't even halfway through the month yet and I have run out of lists or anything amusing to tell you about the dairy. So here is a poem I picked up on a homesteading forum. It does deal with ag issues, just of a different sort...

The sign upon the café wall said OYSTERS: fifty cents.
"How quaint," the blue-eyed sweetheart said with some bewildermence,
"I didn't know they served such fare out here upon the plain."
"Oh, sure," her cowboy date replied, "We're really quite urbane."


"I would guess they're Chesapeake or Blue Point, don't you think?"
"No ma'am, they're mostly Hereford cross . . . and usually they're pink
But I've been cold, so cold myself, what you say could be true
And if a man looked close enough, their points could sure be blue!"


She said, "I gather them myself out on the bay alone.
I pluck them from the murky depths and smash them with a stone!"
The cowboy winced, imagining a calf with her beneath,
"Me, I use a pocket knife and yank ‘em with my teeth."


"Oh my," she said, "You're an animal! How crude and unrefined!
Your masculine assertiveness sends a shiver down my spine!
But I prefer a butcher knife too dull to really cut.
I wedge it in on either side and crack it like a nut!


I pry them out. If they resist, sometimes I use the pliers
Or even Grandpa's pruning shears if that's what it requires!"
The hair stood on the cowboy's neck. His stomach did a whirl.
He'd never heard such grisly talk, especially from a girl!


"I like them fresh," the sweetheart said and laid her menu down
Then ordered oysters for them both when the waiter came around.
The cowboy smiled gamely, though her words stuck in his craw
But he finally fainted dead away when she said, "I'll have mine raw!"
poem

Anonymous said…
Most people have no idea what Rocky Mountain Oysters are. I can imagine this scene in a local restaurant, between a cowboy and a Malibu Barbie type.
March 11, 2008 at 3:44 PM

Anonymous said…
I teach agriculture, and I love to read this poem to the kids. It is more funny when Baxter recites it.
February 2, 2009 at 3:49 PM

Popular posts from this blog 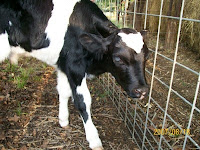 This happened last month. I thought it was an interesting case. Wed Aug 15th 2007 8:30 AM: Went out and brought new heifer calf and cow in from field. Not too sure how old calf was; umbilical cord sort of dried up, but calf still seemed damp. Left her with cow all morning ‘til maybe early afternoon, then separated them. Beautiful, normal calf. 6 PM Fed calf bottle. She slugged back the whole thing. Thurs Aug 16th5:15 AM (approx) Calf comatose. Or as near as I could tell. She was on her side, non-responsive, drooling, head on ground, eyes closed or just barely opened. I tried to feed her bottle but she only swallowed convulsively once or twice, then milk just drained from her mouth. 5:30 AM. Husband went out and looked at her. Drug her out of pen and out of the way to be taken to boneyard later after chores were all done. She was barely breathing and as I said, totally non-responsive.This was a real grief as the cow she came from is a great milker and to get a heifer from her was a joy.
Read more 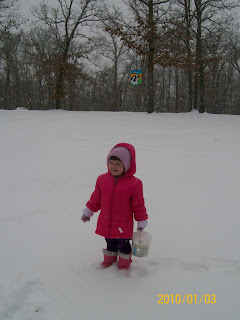 That's a local saying when it's snowing hard. Snowing like cats a'fightin'. You can look out and see the fur flying. Ellen had never been outside while it was actually snowing. She was enchanted. She had to have a bucket of it to carry around. It was in the mid-20s but we took a bit of a walk before coming back in for a nap. The snow is still too dry to be able to make a snowman, it is really powdery. So far we have somewhere between 3 and 4 inches, I would suspect.
Read more