Here are some photos from the annual church hayride and fish fry. It was great fun as always, though this time was better than the last, for various reasons. For one thing Ellen could walk this year; last year she hadn't started walking yet, so it was rather a pain. Then for another, it was shorter; last year it went on for over 2 HOURS and was just interminable; too many skits that went on and on and on... This year it ended in time for us to be able to actually see what we were eating during the fish fry! YAY! Also this year the location of the fish fry was up closer to the main residence; not down on the river with the mosquitoes.

Anyway; everyone had a great time; there were no disasters (even though the kids running on top of the hay bales nearly gave me heart failure), and the food was great, as always. (Though someone DID forget to bring forks!)

Here is a pictorial tour:

We were in the last wagon, so it was a great spot to get a panoramic shot of the procession ahead of us. 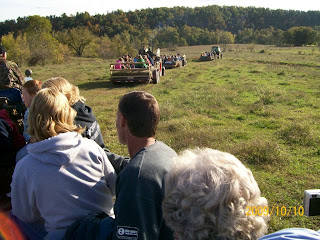 The first skit was the testimony of the two women who found Christ arisen from the tomb, Mary Magdalen and Mary the mother of James. This was done by two teen girls from the church who did a fabulous job. 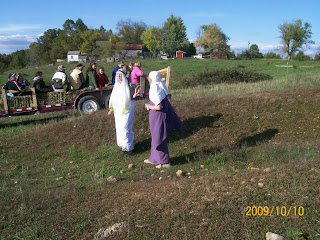 The next skit was of the crazy man in the tombs who Jesus delivered from demons; casting them from the man into a herd of swine. The crazy man was played by a very nice young man who did such a great job at being "crazy" that "Jesus" (our pastor in disguise) got so tickled he couldn't do his part for laughing. The poor crazy man had to stay crazy a little longer until Jesus got his serious demeanor back. It was also at this point, while the demons were being cast out in very loud strident tones, that Ellen decided she didn't like this skit at all and began crying and wanting to go home. (She was so scared she was shaking.) 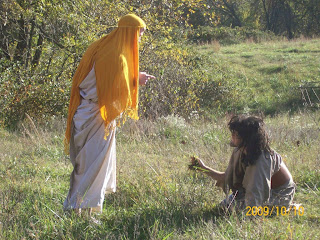 Well, this is going so slow I am going to have to post it and add to it tomorrow.
Posted by Calfkeeper at 8:04 PM