This September, out in my tomato patch among several dozen hornworms, I found this BROWN fellow.  I found him fascinating.  He inspired me to do some research on his kind.

I found that he is a true hornworm.  See the light "V" patterns on him?  That indicates he is a hornworm.  If he were missing the bottom slash and had only stripes instead of "v"s he would be a tobacco hornworm; of the which I have found at least one out in my tomato plants.

However, while not terribly rare, he is rather uncommon in that he is brown instead of green.  In my research they said that you can raise them and that they are easy to keep as pets.

I dunno about the pet part, but I put him in a glass gallon jar and kept tomato leaves in there to see what he would do. 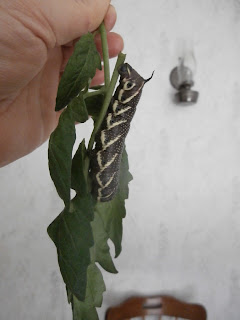 Three days after I put him in the came the day when he went to the bottom of the jar and just crawled around in circles.  I read up a bit more on him and his habits.

Ahhh, yes, he wanted to bury himself and pupate.  So I put a few inches of dirt in the jar and voila; a few hours later he had buried himself.

The websites all said to wait for 2 weeks to check him, but I couldn't resist. 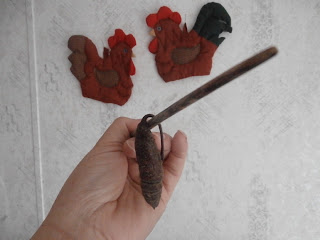 And, yes.  That little hook thing is part of him.  I thought it was weird that he'd have a hook on him, but well, there it is.

I checked him again just a few days ago and he was still wriggling, with no change.  I have his jar in the coolest place in the house; by the back door.  I wonder when he will finally emerge.  Fascinating science stuff for the kid.  The kid in me, that is, Ellen isn't really interested in him.

Posted by Calfkeeper at 8:18 PM

Yes, Frau, I am glad I'm not the only one. :) And if you are homeschooling it's something to keep in mind for a lesson. Over on the Lumberjack's Wife's blog she was talking about how their homeschooling co-op had the kids dissect owl pellets. Fun stuff.