Yesterday morning hubby said his mom had some extra cucumbers; would I like them. Since our patch isn't yet producing mass cukes, I said yes. So here he comes later with a bucket of cucumbers. This is what it looked like when I added our few to the top and sides: 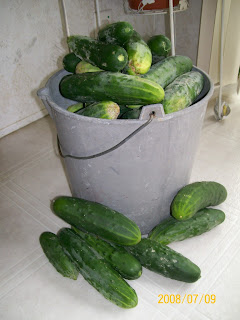 So yesterday I sliced cucumbers for the Amish Sweet Pickles recipe my mother-in-law gave me. It's not hard, just kind of gross to start out with.

Slice up one gallon's worth of cucumbers and soak in a solution of one cup of salt in one gallon of water in non metallic bowl. (Does that make sense?) Let soak for 3-5 days. (This was the gross part...they smell rather strange after just 3 days, but remember that salt is a preservative and in the end the pickles are really good. I made a batch when I was expecting...that was rather a mistake, but I won't go into that here...hahaha)

Drain and rinse with cold water about 4 times to get off all the salt.

Boil in alum water for 10 minutes. (2 tablespoons of alum and water to cover cuke slices.)

Drain and rinse in HOT water.

2 cups vinegar
2 cups water
6 cups sugar (This is where I balked and used 4 cups instead, they came out just as well.)

Put into spice bag (I use one of hubby's old hankies tied up really well, so far it has worked and a little bleach makes sure he doesn't know...ha):

My mom makes home made pickled onions, beetroot and cabbage. I love the red cabbage when it's been chopped and has salt sprinkled on it. I just stand and eat it out of the bowl.

Mmmmmmmmmmmmmmm...PICKLES!!! I may have to try this recipe sometime! I love pickles and Hubby grew up on his mom's pickles. She makes EVERYTHING! Pickled beets, dill pickles, bread and butter pickles, etc.

I tried making dill pickles last year and it was a disaster. I gave them to my family for Christmas and most people were polite about it, but I found out later that they weren't a crowd pleaser! One of my aunts told me that all of my mom's sisters HATED the pickles! LOL! They said I should stick to baking, because that's what I'm good at! *sigh*

I am so envious!

Pickles have always stumped my cooking self, though I love them to no end. I even tracked down a shop in TX that sells Pickle Sickles. Pickle juice freeze pops. YUM! No, really.

It may seem out there, but my favorite thing to do with cukes is slice them and add a few to ice water. It's green, and crisp, and very refreshing, especially when your shoes have fused to the floor from the heat.

Your cukes are similar to ours. We have them as sald or with yogurt.

c-my hubbies mom has never had luck with dills, and I dunno about the Garlic Dill recipe I jus tried yesterday. We shall see. Keep persevering at pickles, don't give up. You never know, you might go into the pickle business. ha.

themama-my hubby likes cukes sliced and put into ice water with vinegar and salt, along with a sliced homegrown onion. That is one of his favorites.

I just don't know about pickle sickles though. Hmmmmm....