Up the tree on camo day

Today was the last day of VBS, which always involves a barbecue and some kind of entertainment for the kids. I slipped off to home early to put the baby down for her nap, so I don't know what exactly the entertainment was.

Yesterday was "wear camouflage" day; something that one of the teachers and his class of boys came up with. I don't own a stitch of camo so I ended up borrowing a camo T-shirt from a friend there. Some folks didn't bother with it either, including the pastor's wife. The pastor is big into hunting and owns lots of camo, apparently his better half could care less. This is a picture of him up a tree in the parking lot doing a lesson on Zacchaeus. It was hard to get a good shot of him because the sun was behind him, but this turned out pretty well; keeps him anonymous. 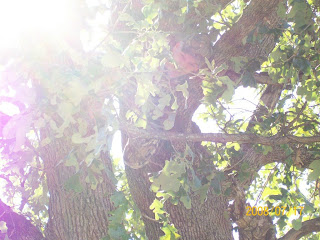 He stayed up the tree for at least 2 hours; from about 9:30 AM 'til 11:30 AM or so. For a couple of the classes it was a fun surprise, but the older ones had caught on by the time their turn came.

Here's another shot of one of the classes in their camouflage. Note the mascot, Cooper the dog, in the middle of the kids. The particular girl, aged 12, who volunteered to be Cooper said; "Never again!" Ha. She had to pose for a shot with every child there; some 50 or so over the course of the week. I guess she got tired of that pretty quick. 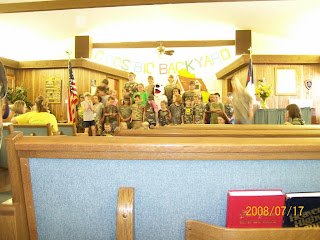 Anyway, we had a good time. Sunday will be the big program, where the kids will do their songs and skits and whatever else they've worked on all week. They will also get their crafts and a treat from the teachers.

Posted by Calfkeeper at 2:08 PM

ya beat me to it post a picture of him!

all well. sorry I missed the last day :(

I bet the girl in the dog costume was hot! Hopefully she had a chance to take off the head and get a breather a few times an hour.

My son's class did all camo for Halloween. They then went into the nature center on the school property and tested whose camo worked best. Surprisingly, the sparkly camo was very effective unless the girl moved so the sun hit it.