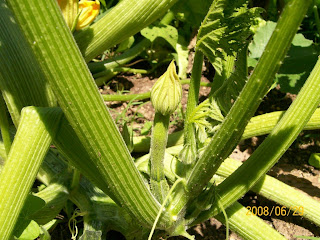 ...or Future Food from my garden. Isn't he cute? He hasn't even bloomed yet.

I took this picture on July 1, no matter that my camera date was messed up and says two days earlier. I am going to try to take Luke's photo every day and then pick him when he's ready. Should I pick him earlier when he is of slicing and frying size, or should I wait until he's bigger and make him into a zucchini pie? I dunno...we shall see. I probably won't be able to post a pic of him every day, but I will try and get them all posted one way or another. He isn't going to last all month, but I am going to post about other things too.
The past week or so I have had a problem with wayward animals. I think it was last Fri or Saturday my husband turned two cows dry, took them to the dry cow pasture up the road about ¾ mile. The day after I went up to feed them as usual. I opened the gate and drove the 4-wheeler up to the corral. As a general rule I leave the gate open simply because the cows know I am going to be putting feed into their feed bunks and they will follow me and chow down. So having counted them on the way in I didn’t bother to count how many actually followed me down to the corral. Therefore I was quite surprised on the way OUT to see a cow standing next to the highway looking at me inquisitively. She honked at me a couple of times to make sure I knew I’d been had. I chased her off the highway and back up my hubby’s granddad’s highway and buzzed back to the barn and told hubby. He took the baby up to her Grandma’s and we took both 4-wheelers back up there to fix the situation. He strung up a dummy hotwire to block off access to the highway and we shooed back into the proper corral.
The next morning I closed the gate behind me and hang me if it wasn’t the right thing to do. She ignored me and the rest of the cows as we headed to the feed bunks and she walked to the gate, stood there and honked over it at the bull and heifers in the adjacent pen. What a character. I have been closing the gate behind me every morning since, even though the past couple of days she HAS been following and going in to eat.
More on my next escapee tomorrow!

Posted by Calfkeeper at 9:39 AM

Umm, shouldn't that be Lucy? :D The male flowers don't have a tiny zucchini behind them.

Maybe it is Luke because it looks like a LIGHT SABRE! from starwars. ?

Solomon-I had considered that fact...however there weren't any female names that rhymed. It's all a moot point anyway; Luke is on a plant that the squash bugs took out in their demolition derby, so he/she is a goner.

moe-thanks for the rescue! ha!