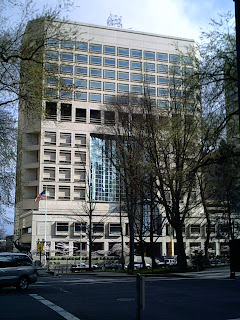 In going through my photo files to find something to post I ran across this picture. This is the building where I used to work. It went by a couple of names; the Justice Center, or as we called it: MCDC. Multnomah County Detention Center. The very top 5 rows of windows belong to Portland Police, their entrance was at the back of the building. The rest of the building was the jail, with the entrance you can see here in this pic. This was the main jail in Portland; one of 5 jail facilities at the time I was there. Yes, the jail population in Ptlnd OR averaged about 1,200 per day, give or take a few, it depended on funding for jail beds. That is more than the population of half this county I live in. When hubby told me this county had not long ago built a nice new jail that would house more than 30 inmates I rolled around on the floor laughing almost. What's really freaky is that they have a whole floor for just the sex offenders.


What does this have to do with the dairy? Ummm..not much, but I am getting desperate for something to post. I was thinking that I would so much rather deal with cows and cow pies and calves and barbed wire fences than inmates and their cranky attorneys. "My client didn't get enough credit for time served on his sentence." "My client says he should have gotten good time and work time credits." Or the inmates themselves: "I'm gonna sue your @#%&* if you don't let me out of here!" Blah, blah, blah.

Yes, it's been 3 years since I left there and the memories just make the smell of cow pies all that much sweeter.

*Edited to add....ahhh, yes. As 26035 noted in the comments but I didn't have time to write about last night; it brings up tons of fun memories too. But I will have to post them later: the baby is squalling right now.
Posted by Calfkeeper at 4:39 PM

Sometimes it was fun, like when the inmate wrote a kyte ALL IN RHYME saying he deserved more credit & we managed to scrape up one more day somehow and wrote a rhyme back(Maybe it was MATT working on this.) Or on 4th of July-s when we turned out all the lights and stood up on the desks to see the fireworks out of the tiny windows.

Boy it must of had been bad, for a cow pie to smell sweet ;0

have a great week!

But yes, 26035, there are so many fun memories assocated with this picture too. Like Matt sitting in the pigeon poop on a bench out front. You can't work with a great group of people and not have fun!

Urine soaked kytes, people screaming and crying on the phone and at the counter, rats out front, commanders who didn't know their own jobs, working holidays, "Shows" out front with the shirt-lifters "THEY ARE MAD AND WANT TO SPEAK TO THE SUPERVISOR" and last but not least, FELONY FEET. I dearly loved that place!

Hey, thanks for bringing back the memories for me. Aah, I just visioned the TSI desk. How I hated that post. Now, some days it sounds pretty good. I guess having 2 kids under 2 1/2 will make you crave adult conversation. Even if it's scheduling jail time. Hey 26035 and 21094 tell everybody hi for me and hope you all have a great new year. 35273