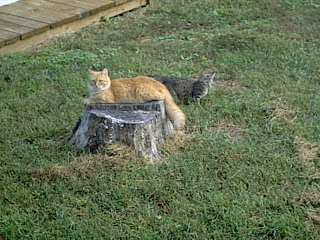 Way back in the fall of '04 when I moved here I went through a rather tough time having left job, family, friends and everything else familiar behind in Portland. I had for 12 years lived where I couldn't have any pets, so here in the country one thing I wanted again was a pet; specifically a cat since we live way too close to the 55 MPH highway for a dog.
I also had the idea that I would create a kind of compost pile out behind the house. This was until I realized that nothing would stay there and compost due to 'possum, skunk, 'coon visitors. But then one dark evening when I was coming back from the barn there was this little ghost that flitted away from the compost pile. I would see it off and on and eventually it became used to me and would just hide behind a tree and mew until I left.
We finally discovered it was a fluffy yellow cat that would sleep up in the hay during the day. One sunny morning in late winter or early spring I saw it up there and went and got some leftover chicken. Before you could say "Purrrrr" I had a pet. My husband's take on it: "It's probably a female, not fixed." Ha! Funny husband!
In a few months I had 3 kittens out in the garage behind a pile of old tires! Two went to a little neighbor girl. One stayed. I named her Matilda. She and Mama Cat had the most fun playing and cavorting around. There is nothing like a cat ballet to remind you how earthbound you are as a human.
In the spring of 2005 Mama Cat disappeared for good. I strongly suspect coyotes and for that reason have hated them ever since. A friend told me that light colored cats do not last long where there are coyotes around.
Matilda is about 2 1/2 years old, so she has managed quite nicely to evade predators. It still bothers me though, but she just isn't an inside cat, doesn't like it much except during winter. She is colored like a bobcat and blends into the background well. I hope she stays around for a long time. Even though I have a baby to care for now, I still love my cat.
Posted by Calfkeeper at 11:57 AM