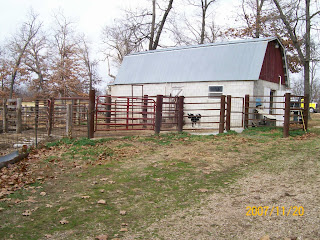 In an effort to find something to post about; here is just a random picture of the holding corral in back of the milk barn. The calf just happened to be in there when I took the pic; she was just separated from the cow.

Initially when I came hereto the dairy I thought nothing special of it. I mean, a corral is a corral is a corral; right? Well, from all the comments that visitors make about it I guess it is a rather nice corral. Even the veterinarian made a comment about how nice it is.
My husband is pretty handy with steel. Collecting steel is his hobby, or one of them anyway. So over the years he has been working on this corral; setting the round steel pipes in as posts and welding the square pipes as rungs, or cross bars, or whatever you call them. There are three separate holding areas in this corral; you can swing the gates around to create one, two or all three at will. It makes it easier to separate out a specific cow when you need to move her somewhere else.
Just last month we finally cemented the pen where the calf is standing. He is also going to use that to keep the heifers that are going to calve for the first time.
There you are; another fascinating post from the dairy. : )
Posted by Calfkeeper at 2:38 PM

I am an Aussie city slicker, about as far away from a life on a dairy as it is possible to be, and I find your blog fascinating. I love it.