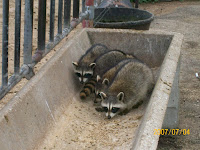 Here is a situation I never expected to have on a dairy farm: trouble with coons. Now don't get me wrong, we live in the country and I expected them to be around. Coons are everywhere. In fact, they were very much present in downtown Portland even. I mean right in the center of town. Portland is very "green" I guess you would say, with lots of parks downtown. The coons were quite at home there and spent their nights in the dumpsters and in trash cans; they are pretty adaptable. But here on the dairy they make their living in quite a different manner.
Ummm...how do I present this? Well, let's see. First off, just a piece of cow information. Cows don't digest the dried corn that they eat; it comes out the other end. And you can see where I am going from here. Coons love predigested corn...gross but true. So they goober through the cow pies and eat the corn.
This past spring and summer the coons were SO BAD...so many of them my husband was nearly tripping over them in the cow lot; he'd be getting in a batch of cows to milk and have to wade in the coons seemed like. There is nothing a coon likes better than a freshly fallen cow pie. I kid you not, I saw it. I saw the tail raise, the chips fall and the coon scoot over to it with a look of glee and start goobering through it before the last chip had fallen. Gross but true.
So anyway, where do these dratted coons head after their poo pillaging? Right over to the calves feed bunk; as this picture proves. And see the water tub beyond...yep over there too. Do they wash their paws before piling into the calf water and feed? You bet they don't. Do you know what a nasty mess 8-10 coons (yes, that was how many were out there at one point, a couple of families) can make in a feed bunk and in that little water tub? ARGH! We unfortunately had to do some weeding out of coons.
Now, though there is one at least that gets up on TOP of the barn and tries to chew into the door to the grain loft. My husband says it certainly isn't squirrel poo that is left up there and the chew marks are pretty big too.
My mother in law just lost a chicken last week too, in broad daylight (well it was about 5:30 PM, before time change). They think it was a coon. There must be a food shortage or something. I have heard that the coons have been bad everywhere this year. I hope they simmer down soon.
Posted by Calfkeeper at 4:55 PM