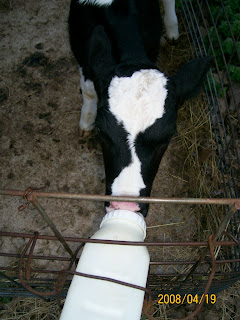 I like the markings on this calf's face. It's kind of like a twisted hour glass or a tornado formation. She was just moved from an individual calf house to the group calf lot over by the barn.
Our turkey hunter apparently didn't get anything yesterday as he was back again this morning, but he got rained out. We had a thunderstorm blow through and he must have gotten soaked, though husband said he might have ducked into one of the sheds down in the creek bottoms.
Every day I think of trenchant things to write in here, but then when I get on the computer my mind goes blank.
Husband's aunt killed a little copperhead in her front yard the other day, so I guess the snakes are out and about. They usually appear in April. The ticks are starting to get thick too. If there's one thing I dread in Missouri, it's all the little varmints that show up when the weather gets warm; snakes, ticks, chiggers, wasps...etc. Actually the non-venomous snakes don't bother me, but the copperheads do.
I forget who sings it but there is this country song out where this backwoods boy is singing about how he wants to take his girlfriend out for a walk the the sticks and through fields of wildflowers and then check her all over for ticks. Cute. Real cute...until you have one bite you. They are nasty and the bites itch for a day or more. Not to mention Lyme disease. Or Rocky Mountain Spotted Fever; that's ugly. (Out here they claim we don't have Lyme disease, but something called Lyme-like disease...ummm...whatever, the symptoms are still the same.) Some boyfriend.
Posted by Calfkeeper at 9:45 AM

I had a tick-bite a few years back that left that huge, bulls-eye mark that signals lyme disease. Doctor gave me antibiotics.

The only snakes I see around here are black snakes and garter snakes, but I know there are copperheads around!

the calf 's cute. We 've gpt plenty of varmits here too, including snakes

the calf 's cute. We 've gpt plenty of varmits here too, including snakes

Yeah, I get several tick bites every summer, but so far no bad reactions.

amrite-yeah I'm sure there are nasty snakes there where you are. Ick!