Last fall our only bull became super, super mean.  Gary had wanted to keep him for at least another season...until spring perhaps, but the bull got to where it was chasing him and cutting up really badly during round up, so we had to get shed of him.  There weren't many Holsteins immediately available soGary decided to add some new blood to the dairy gene pool with a fairly inexpensive and locally available beef bull.
Meet JuniorJuniorJunior:
He is a Beefmaster. 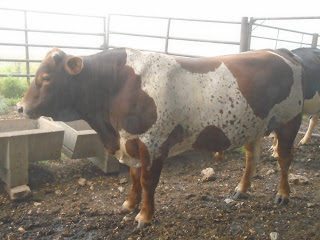 What I have found interesting is what his progeny look like; Holstein/Beefmaster cross calves.
The first 5 or so calves we got from him were bulls; much to my disappointment.
Here is one of them.  We were surprised that some of them were red like this.  And a couple people who asked Gary about the Craig's List ad claimed Gary was listing pure bred Jersey bulls as beef/dairy cross. 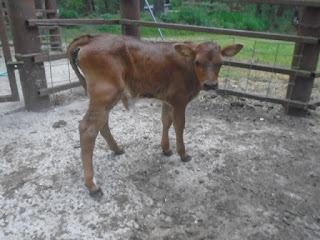 The one below is another little bull.  He was pretty much black and white, but you can tell by his odd spots and colorings that he is a cross. 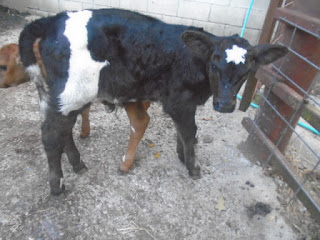 After several more bulls we FINALLY got a couple of little heifers; both of whom are neither black and white nor truly red like their daddy.  They came out more brown.  In fact when Gary first saw the one below he thought she'd walked into the mud at the edge of the pond or something.  It took him a minute to realize that she has brown boots.  I will have to get better pictures of the two heifers.  The other one is brown/white, but totally different yet. 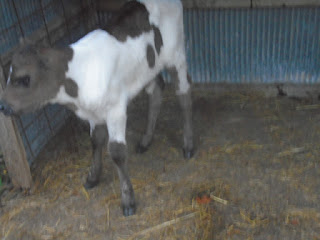 Posted by Calfkeeper at 8:26 PM