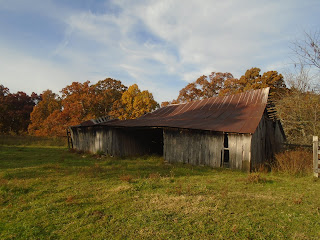 This barn is yea-and-I-don't-know how many years old.  It is up on the ridge above Four Mile Creek.  When I go there and visit it, I am always saddened that we are unable to keep it up.  It is almost inaccessible, and the way it is built prevents it from being moved and restored elsewhere.

Here is what I know of the story behind the old homestead.  I will edit this as I get more information.

This is the house as it is now. 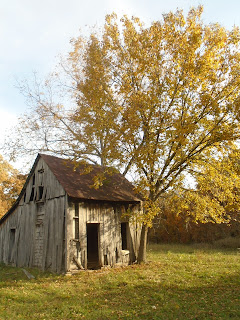 The Howards originally came to this area in the late 1800s as far as I can gather.  They homesteaded up on the ridge; built a log cabin (no longer in existence) and a barn.  I do not know if this is the original barn, I would guess not.  I would guess the original was probably of logs as well, but I am not clear on that point.  There is also a pond to the west of the barn. 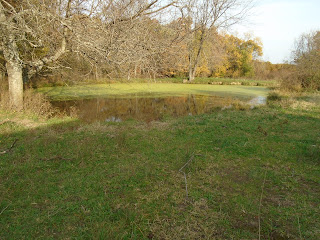 The original homesteaders of the property were Edward Spain and Rachel (?) (Haney) Howard, I believe, though I am sure someone will correct or concur somewhere along the line so I can edit this to make sense.

At some point Gary's Grandma and Grandpa Howard lived here, perhaps not long after they were married.  She was expecting their first child, Marion, Gary's dad,  in 1918 when her husband, Gary's Grandpa Howard, was called off to serve in World War I.  He died in the flu epidemic in 1918 before Marion was born.  She subsequently sold the property to the Junkins sisters, who lived there in the house and farmed the place for many years.  Gary's grandmother remarried an Evans and from them stem several score of cousins of varying degrees who live all over Missouri.  (Gary's mom's side has probably a bajillion more, one uncle had 16 kids, but we aren't going to get into that story just now)

So however the barn got there, the Junkins sisters, Minnie and Bertha, lived there in the little house and farmed there.  These are the sisters; Minnie and Bertha are on the left, Martha Junkins Dugan is on the right. 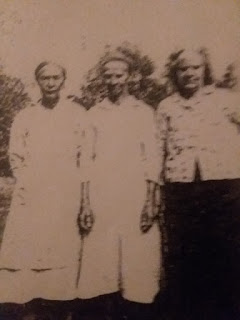 They had long hair and braided and in a bun on the back of their heads they had several white faced cows, spotted hogs and White Rock chickens.

If you have read any of my other blog posts about the homestead, you have seen this picture.  The old pecan tree fell on the chicken house (on the left) back in the ice storm of 2007. 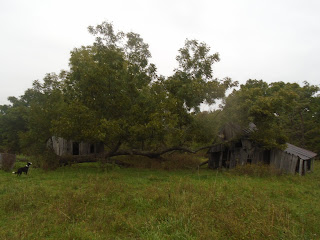 The tree still bears pecans, and there is a smaller pecan tree growing up from near the roots of this one.

They had a beautiful flower garden in front the house and a garden and orchard in back.  Their daffodils have run rampant and bloom all over around the house every spring.  They had a smoke house where they cured pork.  They stored some of their harvest, probably for the cows or horses, up in the barn loft.  I did not have to ask anyone about that; some of it is still up there from the last harvest in the mid-60s.  You can yet see the corn leaves hanging down. 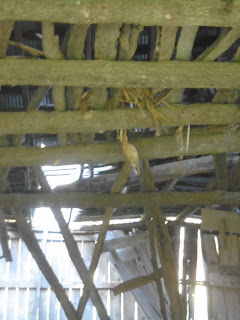 ,
You can also see the damage time and weather have done to the SW corner of the barn.

When I go up there and look around the barn I always think of all the labor that went into it.  Someone dug the rocks for the wall supports and corners and positioned them just so: 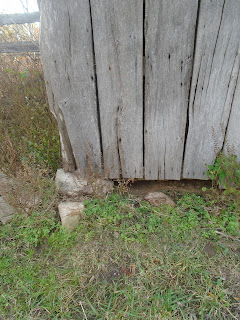 Someone; maybe a group of men together, spent hours and hours falling trees, trimming logs and hewing notches.  Then they spent time and dripped sweat whilst positioning every log in its place. 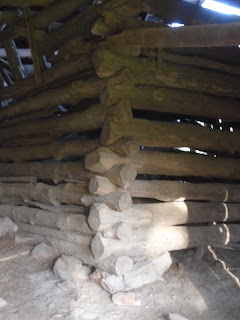 This is one of the stalls in the barn.  Look how the walls are balanced on the stones.

Someone fashioned the feed troughs. 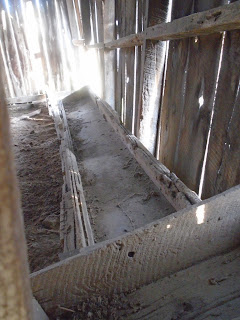 It's not really clear in this picture, but they built a corral on the north side of the barn.  It was still fairly warm when I was up there this fall, so I didn't go exploring the corral, too weedy and potentially snake-y, but it is yet standing. 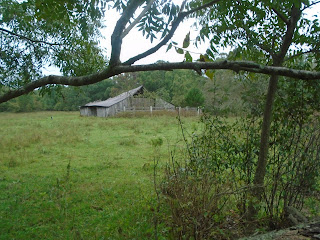 Gary says he remembers that his dad, Marion, helped put up tin up on either the house or the chicken house, perhaps even the barn, I am not sure.

Another interesting tidbit; Gary says that the well was dug by a blind man; last name of Eef, (not sure on spelling, Eiff, Eeff...?)  I believe it was hand dug, too.  Apparently he began his well business when he was sighted,  and eventually went blind, but his kids helped him stay in business.

The sisters eked an existence up there.  Sold cream and eggs at the little store over on K Highway, a few miles from us.  They'd walk down there to sell things.  That was back in the days when stealing chickens was very close to a hanging offense. They had no electricity.

One sister died in the 50s (?).  The other lived there until 1968.  The daughter of one of them kept the property for awhile I think.  She knew that it was originally owned by Howards, so she contacted Gary and he bought it back.  I will have to look at the paperwork to find out the exact dates.  He has the original paperwork from the courthouse I believe.

Janey says one of the aunts (they were her aunts) always had a chaw in her apron pocket.) 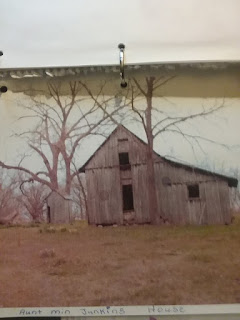 Here is a painting of the place, also undated, but apparently done before the well was dug, as the wellhouse is not included in the painting.  A lady from Oklahoma painted it. 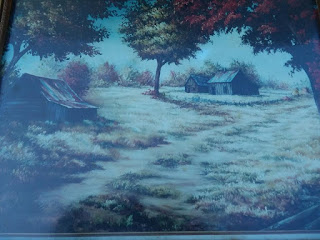 If anyone has any other info, or can add more details, please share and I will edit this to include it.
Posted by Calfkeeper at 6:51 PM