New Monster on the Dairy....lol

My husband is working on a new enterprise; he always has a project going on.  In any case, here is his newest baby: 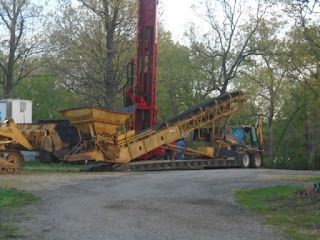 Some sort of gravel sifter.  It had to be delivered at night because it wasn't exactly road legal.  So the hauler showed up with it pretty soon after Gary'd started his milking at 5 AM-ish.

It was quite the ordeal getting this monster unloaded; they'd had to remove the wheels to get it on there.  So Gary had to use his backhoe and his bulldozer and I don't know what all to unload the thing.

In the meantime though, guess who was pressed into milking duty for a few batches? 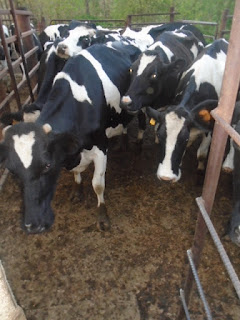 It was all good.  These were some of the first batches of cows; the older cows.  I could tell because all I had to do was open the door and they'd file into the milk barn and take their places.  The older cows have worked out their own pecking order as to who gets to come in first, second, third and fourth.  Bovines love routines.

Posted by Calfkeeper at 8:48 AM