A Walk After a Flood

It has rained almost non-stop here for the past 3 days; just one storm after another sailing by overhead.  The flooding in part of Missouri south of us has been horrendous and a few lives have been lost.  Notably a lady attempted to drive over a water-covered bridge and was swept away.  Somehow she managed to get rescued, but 2 small children in the car were swept away.  So needless, so tragic.

The Niangua River here, close to us, flooded badly again.  Not as badly as last year; I don't think it got over the Windyville bridge, but very, VERY close to it.  Neighbors across the river had their basement flooded again.  EEK!

So anyway, after a few days of laying up in their doggy houses I figured Bella and Deuce would like a long walk.  Ellen and I took them down to the creek to see what we could see.

First off at the bottom of the hill they found this: 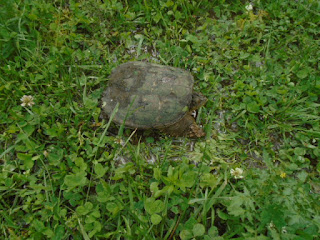 Some sort of snapping turtle.  They didn't bother him too much; seemed to instinctively know not to mess with him.

There were still large areas of water all over in the creek bottoms.  Deuce had to try most of them out by lying down and squidging around in them.  LOL  Such fun. 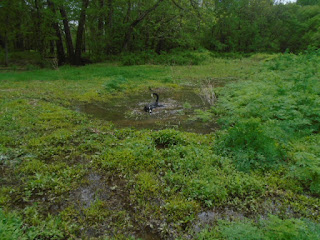 Here's a funny pair of pics:  The dogs waded fearlessly into the rushing creek waters.  It looks quite calm in the pic, but it was really running through super high, super fast.  Ellen is watching and almost freaking out because she's afraid they'll get washed away. 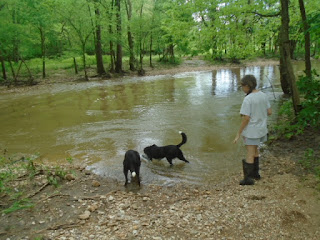 Then in the next pic, they have again instinctively sensed the danger, headed out of the water and toward her to see what her problem is, she is warning them off, "Don't jump on me!" 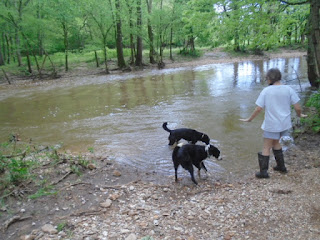 You can see a ways away from the creek what it leaves behind; every tree and clump of grass has a pile of debris behind it. 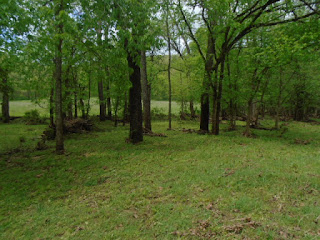 This flood seems to have left quite a bit of debris; leaves and limbs and whatnot.

Last but not least: 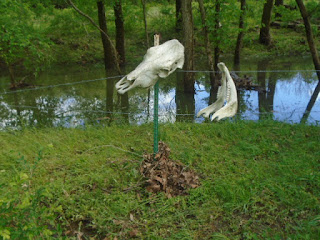 Posted by Calfkeeper at 4:49 PM