The Story of the Maxwell House

When I moved out here in 2004 I vaguely remember hubby and his family discussing that a Mrs Maxwell had passed away and wondering what would become of her property which was situated across from my in-laws place.  Hubby professed his interest in purchasing said property; maybe 10-15 acres and the house pictured below.  The heirs to the property, Maxwells having no children, said they would consider it and there the issue was left to simmer on the back burner for the next 10 yrs. 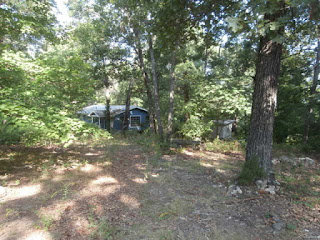 Last fall hubby finally got the heirs to capitulate and sell us the property.  We did not actually want the house, we wanted the 10 acres across the road, next to my in-laws place.  Mostly so that no one else would purchase it and put up a dwelling.  But also it will be nice to graze calves there.

Believe it or not, in order to actually get them to sell the place to us we had to agree to give them 9 ( count them; NINE, months to clean out the house.  There are also two outbuildings, one only partially visible in the above pic; the white thing to right of center.  They still have to the end of 2015 to clean out the storage sheds.

Anyway.  Their date to hand us the keys to the house was June 30, 2015.  They came for a few hours once or twice, but didn't do too much in the way of cleaning until about June 15th.  And I say "cleaning" loosely.

After we got the keys, hubby went into the house and found the following:

This is what we call the sun room.  The first door you walk into. 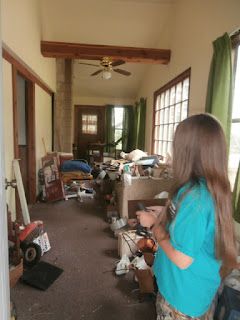 Random items on the sofa in the sun room. 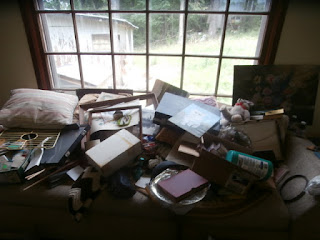 Fifteen-plus year old food in the cupboards.  There were actually eggs in the fridge.  Hubby broke one open, it had actually completely dried up. 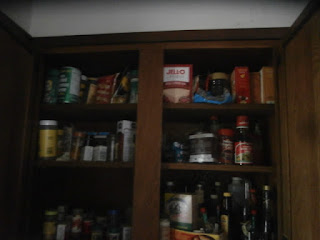 The contents of one bedroom.  There was another bedroom almost as bad.  The dining area was piled up like this too. 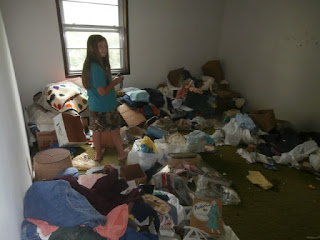 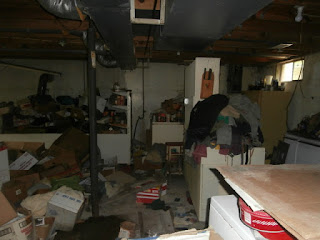 To say the least; the Maxwells were hoarders.  You name it, they had it.  Much of it was dated from the 70s.  It was a nightmare to clean up.  But we got'er done.

Now; to work on my thankfulness deal.  I am thankful that though my house is cluttered and I fight it all the time, I am not this bad.  I am thankful I CAN let go of things, donate them and pass them on to others while the items are still usable and not saturated with an indescribable stench. I am thankful for the chance to clean out a house and find various treasures to reclaim.  That part was interesting.  I am thankful that our family worked as a team to get it cleaned out.

Posted by Calfkeeper at 8:47 PM

That is very sad. I've known a couple of hoarders & I feel sorry for them. It's hard to understand. And I'm sorry for what you had to clean up :(