Green Beans, the Arora Borealis and the Taste of Christmas 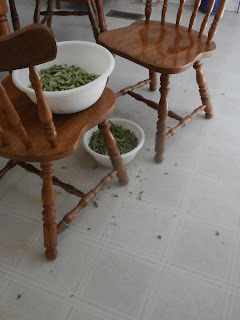 This past spring in my garden I planted my first half of a garden bed of green beans on May 29, 2012, the second half I planted about 2-3 weeks later.  I watered them all the rest of the spring.  No blooms.  Hubby watered them for 2 weeks while Ellen and I were in California.  No blooms.  We came back home and I kept them watered through an interminably hot, hot summer; daytime temps 90 degrees and over for at least 2 months...sometimes over 100 degrees for a week or two at a time.  No blooms.  I watered them when they looked so wilted and decrepit I thought I ought to stop watering them.  No blooms.

Hubby said nothing, but had severe doubts, I believe.

But finally a few weeks ago, when the temps dipped below the 90s at last; LO! to my everlasting relief my green beans started to bloom!  THREE MONTHS after planting!  About 2 weeks ago I canned about 6 pints.  Today I canned 7 quarts, and have enough for another 2-3 quarts.  I think if we don't have an early frost we might get more!

Hubby was off on a well job today.  So I carted all of these green beans inside to clean and snap them.  To help pass the time this job is best done as a community affair; having someone to talk to helps pass the time.

I was alone.  So I plugged in a DVD of the second season of what used to be my favorite TV show (back in the day).  Can you guess what it is, from my title up there?

While I was watching and snapping I broke down and indulged in TWO cups of cinnamon-flavored Starbucks coffee.  Yes, I fell off the wagon and started drinking coffee again.  This happened because I found this bag of STARBUCKS coffee at the cheap store for just $3.  It was only 3 months out of date; still good.  Cinnamon makes me think of Christmas, and it was a good thing that I had green beans and Joel's adventures to distract me, else I might have become distraught at the thought of Christmas shopping.

But, after 2 and a half episodes I had the beans snapped and was buzzing from the coffee.  Three hours later, I am still buzzing and the theme song keeps replaying in my head!

These must be the reasons I feel the urge to wax philosophical like my friend "Chris in the Morning." HJe quoted Jung all the time, but I shall paraphrase a Bible quote: "But let patience have its perfect work..."  James 1:4

Hey, or even Galatians 6:9  "And let us not be weary in well doing: for in due season we shall reap, if we faint not..."

In other words; keep watering your green bean vines, no matter how hot the summer, they will bear fruit eventually.
Posted by Calfkeeper at 2:48 PM

I'm glad ya got your green beans to grow, coffee is soo good. :)


I have been watching my christmas shows too. :)