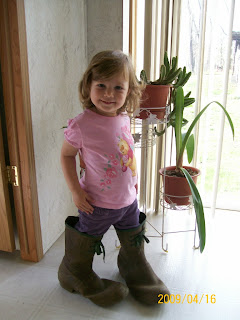 Ellen was trying on some boots the other day. She needed a bit of help to get these on and it took her some dragging around to get them off by herself. But she was proud to pose for a few pictures while she was in them. I hope she never is able to actually fit these, hubby's size 12 shouldn't be wished upon any female.

It rained last Sunday on Easter and according to a local saying I have never heard, if it rains on Easter it will therefore rain for the next 7 Sundays. Today is Sunday number 1 and sure enough it has rained most of the day.

Yesterday hubby broke down and in self preservation bought a "Looney Toons" DVD so as to have a break from Barney, Pooh Bear and Blues Clues...etc. We watched a couple of them last night before bed. Today Ellen is asking to watch the "rabbit bug." I couldn't figure out what she wanted at first, but finally it dawned; "Bugs Bunny." Ha!

As far as dairy news goes; Well, we have 2 heifers about to freshen...have their first calf, and one dry cow about to calve. Last weekend, on the 11th, we got a new little heifer calf. Otherwise it has been slow in the bottle calf department. I ahve two to wean this week, that will leave me with only 2 on the bottle.

The spring flush has been slow to come on because it has been so cold. The grass just hasn't done much growing, so the cows had to have hay up until just a week or so ago, so they haven't really upped their production much.

I think the milk prices are still at a low, so no progress there. But we weren't really expecting much improvement soon.
Posted by Calfkeeper at 4:13 PM

she 's the cutest one