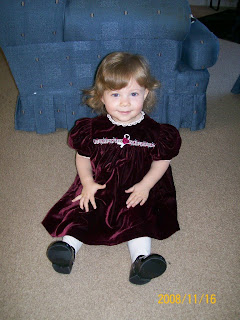 For want of anything interesting to post today here is yet another picture of Ellen. Not the greatest, but she's always cute.

We have a new activity that she loves to do; smell the spices in the cupboard. She recognizes garlic and cumin, and calls them by name. This morning she also recognized the cinnamon. She gets out a fair immitation of the names, she started calling cinnamon "cake," which kind of surprised me. Maybe her aunt or grandma had some kind of cinnamon cake they gave her, I don't know, I certainly have never made any kind of cinnamon cake that I can think of, or in any way instructed her on their association.

She loves to use "pay-peer" and a "peen" to write with. But she has been banned from using pens unless she is stuck in her highchair. She has already written in one of her books. *sigh*

Oooh she is so sweet.

My little nephew together with the naming of the spices , tasted something too and was discovered when he started crying.

amrita-ha. yes, I expect that will come as well. She already exhaled into the cloves and got a snoot full.