The post in which I talk about how my RES was blind and now can see!

ALERT!  CAUTION!  I am not a veterinarian.  I am not giving any treatment advice here!

I am only telling the story of my turtle, a common red-eared slider, or pond turtle.  We call her Turkle. I actually have no idea if this is a "he" or a "she", but I decided on "she" just to make things easier when I write about her. You can find the story of how I found her here: The Turkle"

As of this writing I have had her about a year.  Feeding her has been a challenge; and this is the snag upon which hangs this tale.

Unbeknownst to me the diet of the RES is about 75% vegetation, according to one website.  From the get-go she summarily refused anything but protein; wouldn't eat the pellets, wouldn't strike at earthworms even; just cooked chicken or dried shrimp or mealworms.  So for the first 5-6 months of her life that's what I gave her.

Then Dec of 2016 as the temps grew colder I noticed she began to just not eat.  She'd hide in her hidey hole, or sun herself occasionally under her lamp, but wouldn't eat.  I assumed she was just doing some sort of semi-hibernating like all the pond turtles do around here.  This continued for about 3 months, though she'd occasionally strike at food I'd put in her habitat.

Then about March 30th 2017 I really took a good look at her and was appalled to discover her eyes were swollen.  She wouldn't react by retracting her head when I waved my hand over her.  I got online and did a bit of panicked research on the subject and viewed many many pictures of blind turtles.  I learned there could be 2 causes; lack of vitamin A or some sort of bacterial infection.

Here were some of the suggestions: take turtle to the vet, put cod liver oil on turtle or in her water, give her carrot baths.

I contacted my neighbor who works at the local veterinarian's office; nope they don't do turtles, but did advise that if it was an infection to put penicillin on her eyes.

After a bit more research I started my own treatment. I decided that there was a 99.99% chance her eye problems were due to diet deficiencies.  I wanted to start treatment immediately but since we live way out in the middle of nowhere I had to work with what I had on hand at the time.  Therefore I began with a carrot bath.  (I decided to not do the cod liver treatment; ick, messy, gross.)

Here's a pic of what I used: 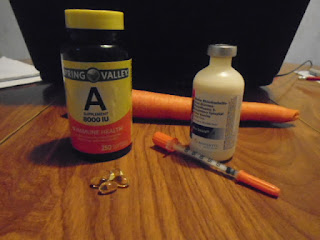 (except in total I used several pounds of carrots...lol)

Here is the timeline of my treatment:

Thursday 30 March 2017:  Discovered Turkle's eyes are swollen shut, she does not respond when I wave hand over her head.  Treatment:  Whacked about 4-6 carrots into chunks and processed in blender in 2-3 batches w/ water to make carrot juice.  Sieved this through one of my husband's clean older hankies (he won't miss it until he reads this...haha).  Ended up with maybe 2 cups "juice." Put Turkle into bowl w/ carrot juice, it just barely covered her shell.  Left her there full 24 hours.

Saturday 1 April: In the AM: got up nerve, used one of my T1D daughter's insulin syringes to inject 2 units of Vitamin A oil taken from over-the-counter Vit A capsules purchased from Walmart.  Injected into Turkle's butt, about 1/2 inch or so from tail.  Put Turkle back into clean water until evening.

Mon 3 April:  Removed from clean water, let bask under her lamp.  While dry dribbled a 3-4 units of calf med, some sort of anti viral stuff, onto her face on the off chance that this might be some kind of infection.

Turkle jerks her head under in reaction to movement over head.  YAY!

Put her into water and covered surface of water with turtle food; she strikes at it.  Am hoping she ate some.

Put Turkle back into carrot juice bath for 24 hrs.

Tues 4 April 2017:  Mid-morning...Turkle jerked her head back under carrot juice when I approached her.  Eyes still swollen though, seems to only peer about briefly at intervals.

From this last entry up until Sat 24 April I gave up hope because she no longer seemed to respond.  Though I did do one more injection of Vitamin A into her butt sometime about 10 days after the last carrot juice soak.  I'd put her in a bowl of water w/ food and occasionally she would strike at food, but not often.  But in that time; about 20 days, only once or twice would she strike at food or react to movement overhead.  Her eyes stayed swollen.

On Saturday 22 April Turkle reacted to movement over her head.  I was so excited.  I gave her another 24 hr carrot juice soak.

Sunday 23 April: I saw her actually peering at me with her left eye.  That eye is no longer terribly swollen.  But the right eye is still profoundly swollen and appears to have white film over it.  I am hoping it is just the inner membrane and that it will retract.  Put her into clear water.

Monday  24 April; Gave her another shot of about 1-2 units of Vitamin A again and another carrot juice bath.

Tues 25 April:  Turtle's right eye is quite miraculously gone down.  At least it's not white like it was. 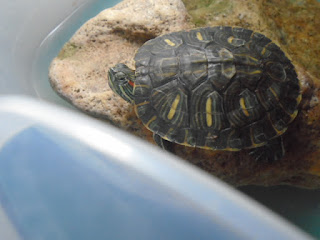 The little dark slit on the side of her head is her pupil.  I will add that in this pic you can see her shell appears to be doing what I assume they are talking about when they say "pyramiding."  She still refuses to strike at any kind of vegetation.  I will have to harden my heart and refuse to give her much proteins until she learns to eat her veggies. Hopefully then her shell will start to grow like it should.

As of today; 28 April, she appears to see out of both eyes, reacts to movement and seems to be doing OK.  Time will tell.

Posted by Calfkeeper at 6:59 PM