Long, long ago, back when I was still living my California life, my sister got me a turtle.  A red-eared slider.  This was by my request, by the way.  For some reason I have always been fascinated by turtles and I wanted one awfully bad.  I put it in an old aquarium and kept it for about a year.  Unfortunately I don't think I ever actually took a photo of it; for some bizarre reason.

In any case my dad started calling it the "Turkle."  This is because his mother, my Grandmother Davis, always called them "turkles."

In June of 2015 I caught the below photo of a red-eared slider, commonly called a pond turtle around here, laying her eggs in my green bean patch. 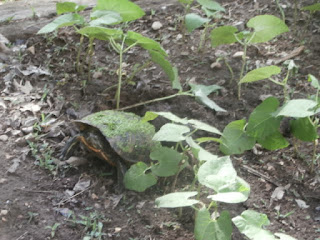 Then this past spring I'd pretty much forgotten all about it.  Gary tilled the garden beds and imagine my surprise when I went to plant my beets and found this: 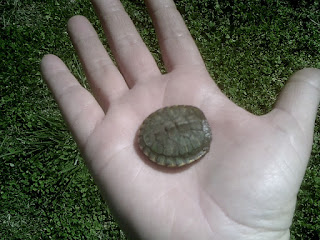 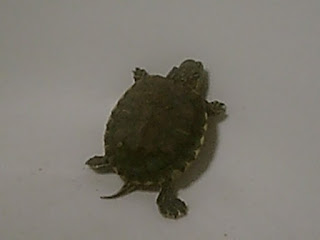 Isn't that the cutest thing?  A baby red-eared slider.  I was enchanted, so I kept it.  It wasn't until much later that evening, after the beets were planted, that it occurred to me that there might have been more than one of them out there.  I went out to check and sure enough there was a little oval-shaped hole where one had crawled out.  I never did find it, so I hope it found its way to the pond.  But the mortality rate is pretty high.

At any rate, ours needs must have a name.  Right?  Ellen went online and looked up the most popular turtle names.  She came up with "Pebbles."  But, as is our wont around here, we have given it a nickname.  I remembered what my Dad always called them, and "Turkle" is what we call it.  A Davis family tradition being passed on.

I strongly suspect this is a female, though it is hard to tell.  You are supposed to look at the plastron, the bottom of the shell.  If it's concave it's male, convex means a female.  I believe...

The Turkle has grown by leaps and bounds.  We probably won't be able to keep it very long, due to a proper housing shortage here.  You are supposed to keep them in a tank with 10 gallons of water per inch of shell length.  She is rapidly reaching 3 inches long now, and I only keep her in a tub with maybe 2-3 gallons of water.  At this point she is happy enough, but I am going to try and get a bigger tub and larger rocks for her to climb out on so she can sun herself.  When she gets TOO big, maybe in a year or two (females can reach 12-13 inches in length) I will let her go back to nature.


Until then we will enjoy watching her little quirks.
Posted by Calfkeeper at 9:37 AM