This actually happened on Sept 1st.  I started this on Sept 2nd, but have had in draft since then.  LOL  In the intervening time I have forgotten quite a few details....maybe on purpose!  Haha

To begin with let me just say that  in the almost-13 years I have been on the dairy,  I have had minimal trouble with any of our bulls, and have only been in dangerous situations a couple of times.  All of those times were up the road in the heifer/bull pasture where we take the open heifers to be bred for the first time, and Gary was always with me.

(Hi! I'm Ellen :P ) (Um, this is what happens when you walk away from your blog for a moment.)


Yesterday however I was on my own.

Last year I went into the heifer/bull without hesitation as the bull was quite docile, minded his manners, and stayed with his ladies.  We were in and out of the multiple times from Nov through Feb; feeding, getting calves and cows...etc.  He didn't make a moo about it. 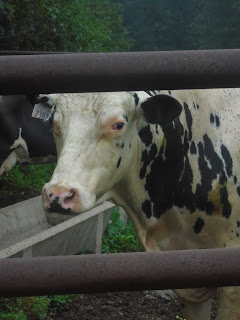 All summer however I had been going in the side "keyhole" access gate that goes directly into the corral, instead of taking the 4-wheeler through the big gate into the pasture.

Then yesterday I had to catch him because unfortunately his number was up to be culled.  So I thought, erroneously, that it'd be easier to catch him by going inside the enclosure, so I could nip out the gate after I closed it behind them.

Soon as I went in to the pasture he saw me and came after me, chased me around a bit, with me screaming.  AAAAAAAAHHHHHHH!

Then I threw a bucket at him which distracted him a bit until I got to the corral.  Then I grabbed the bucket of feed, tossed that toward him (as well as I could with 30 lbs of feed in it) and got to the corral.

He displayed a bit, moaned and groaned at me a bit, but I chased him away from the bucket, got the feed, or what was left, into the bunks and got him caught.

It was rather hair-raising.  He wasn't actually attacking me, per se, he was just excited about getting his breakfast.  But when an animal weighing almost a ton gets excited and shows that excitement by butting at you or your 4-wheeler, things can get out of control.    He could easily have flipped the 4-wheeler.

At any rate.  He's hamburger now and I am still around, undamaged.  So all is well.

(Thankful: thankful that God is good!  I am still alive.  Life is good!)
Posted by Calfkeeper at 4:47 PM