Random Thoughts on a Random Picture

Ellen got hold of the camera whilst I was out of the house momentarily on Friday night.  Here is what I found on my camera just yesterday: 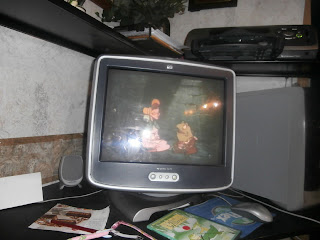 She was watching "The Wind in the Willows."  For some reason she wants to take pictures of movies she watches.  Mean mother that I am, a few weeks ago I erased the pics she took of "Spirit; Stallion of the Cimarron."

Here are some of my random thoughts and comments on this picture.

1)  Yes.  We DO own a television.  Remember the 29" monstrosity that hubby won this past spring?  It is in its box sitting here behind the front door in the living room.  We loan it to the church to use, if and when they wish.

This means that Ellen watches her DVDs on the computer.  It all works out fairly well, except for the long warm-up wait.

2)  There is a white folded scrap of paper that has yet to be tossed; but it might be useful for scratch paper.  Like for hubby to write down a number off of Craigslist, or something.  Ha.

3)  To the right of the white paper is a pic I tore out of a Swiss Colony catalog that came the other day.  It's a pic of a German Chocolate Cheesecake.  It looked sinfully enchanting, so I tore it out so I'd remember to Google the recipe.  There are tons of variations you can make, but none that have a layer of filling in the middle, as the pic shows.  Hmmm...I will have to think about how to do that.

4)  For some reason Ellen also put one of her defunct watches here on the computer table.  Along with her used Tinkerbell toothbrush that she is loath to give up.  I do not fully approve or condone the scantily clad flitting fairy, but we must choose our battles.  I have won the NO Sponge Bob battle; so far.  I will concede the Fairy battle.

That's all the random thoughts on this picture I can conjure up for the moment.