Today at church we had our ladies GLOW meeting.  This is just the church ladies getting together.  GLOW stands for something, but when hubby first heard it he called it, God's League of Old Women (or God Loves Old Women...something along those lines.) so now I just think of that and can't remember what it really stands for.

We made felt pumpkins: 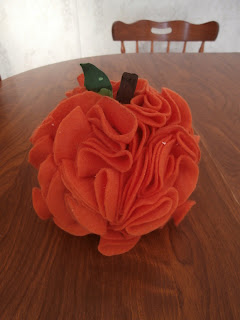 It's a cute idea.  The example was cute.  But somehow my crafts never look cute.  I need to rearrange the felt a bit; that might help.

I think the person who organized this craft said she got the idea off of Pinterest.  If you are interested go to Pinterest and find it.  Or, you could do as I did and Google "Seven pieces of felt for pumpkin craft."  That will take you to someone's blog, where the whole idea probably originated in the first place.

We had fun making them, though.

Then, one of the ladies at the GLOW meeting said she had pumpkins to give away.  So another lady and I followed her home afterward.  I brought home 2 large and one small pumpkin.  I just took one of the large ones out of the oven.  I think 54 minutes is enough to bake a large one, don't you?

Really, I haven't a clue.

I want to process all 3 of them for pumpkin puree to freeze.  I have never done this before.  I shall keep you informed of my failure or success.

I kept all the seeds, too.  I seasoned and roasted the seeds from the pumpkin Ellen and I carved a week or so ago.  They were YUMMY!  So I am going to roast all of these seeds, too.

Posted by Calfkeeper at 1:19 PM