Half of a Heifer

Here you can see about half of a 3 year old heifer.  Well, not quite the full half, but let me tell the story below. 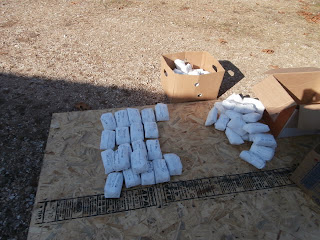 About 3 weeks ago hubby went out and found a heifer down; couldn't get up.  The end of the story is that she had a shattered back leg.  In an unprecedented move we went ahead and had her butchered and split her with a neighbor family of 5.  The broken leg was so damaged that we lost about 50-60 lbs of meat, maybe more, I don't recall, so we didn't get all the meat off of her that we could have.  She was about 3 yrs old and being a dairy cow instead of a beef cow, she didn't have any good cuts on her.  We got some jerky cuts for the neighbor, some stew meat for us, and the rest in hamburger.  We gave part of our hamburger and stew cuts to hubby's mom.

Hubby has never before, as far as I am aware, in the history of his dairy, ever butchered one of his animals.  For one thing, unless they are sick, he prefers to take them to the sale barn and get whatever cash out of them he can.  And, if they ARE sick, he's not going to have anything to do with eating them, so the coyotes and buzzards get them.

So.  Now I have a freezerful of hamburger.  Anybody want to trade?  I'll take some other kind of meat, pound for pound?  Ha.  I can't remember the last time I bought any beef.  The only beef we get is what might be in a can of chili beans; and usually I get the chicken or turkey chili.  Or on rare occasions we will have hamburgers at a fast food place.

I don't even buy roast beef deli meat.  It isn't that I don't care for beef, it's that I just never learned to cook with it.  Given my dad's refusal to eat red meat of any kind, my mom just never fixed it.  Of course, I know how to use ground beef, but other than that...

A funny story here about beef.

Just a few weeks ago we went to a Holstein Association meeting down near Springfield.  They had a barbecue there and served barbequed roast beef.  It was the only meat they had.  Hubby was first in line and got some on a bun.  Ellen wanted some on a bun as well, like daddy.

But when Ellen went to eat it, she wrinkled up her little nose and said; "I don't like this meat, it taste-iz sour. "  I had to giggle at that.  It was perfectly good, normal-tasting roast beef, but she had never had roast beef.  And that was her opinion of it.  I wonder how she will handle the hamburger.
Posted by Calfkeeper at 2:13 PM