I have discovered that almost 3 year olds have an immense "scope of imagination" as Anne Shirley would have put it. Add to it the tendency to get so many look-alike things confused and you have fun stuff.

For instance...these are "nests." They aren't really clear in the picture, but they are the whites of a boiled egg that I quartered for her lunch. She eats the yolk, but leaves the "nests." 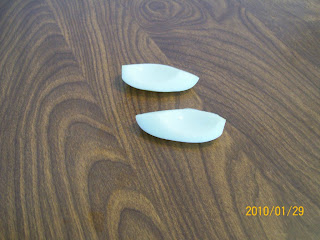 The following item is a "vacuum" which she seems to think is used to clean the shower. I caught her "vacuuming" the walls with it. (Please note; I do NOT let my child play with razors, she had it before I could think.) 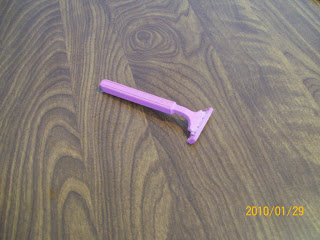 And this final montage is where imitative imagination comes into play. Here she has set up a scene from one of her favorite kids' stories.

Can you guess...a mop, a throw rug, a one-armed teddy bear and a pair of shoes. 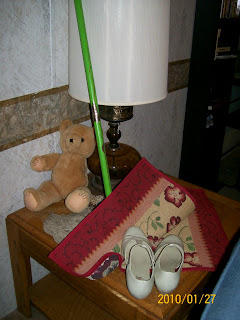 It's Cinderella, of course. Silly that you couldn't think of it. The mop is Cinderella herself, the bear is the prince (poor prince lost his arm...he gets lots of petting.), the rug is Cinderella's gown and the shoes are the glass slippers.

Is that too funny or what?
Posted by Calfkeeper at 2:40 PM

what is funny, is that i was reading this to DH, and when i got to the final can you guess, he guess it without help of the picture! I thought it was pooh bear! :)

we are getting cabin fever bad here how are the roads your way?

HAHAHA!!! Ohhhh...This post just had me laughing so hard! Thank you for the Monday laughs! The "vacuum" cracked me up!

BTW, Anne Shirley is a fantastic role model! She's oh-so-much-fun!!! If anything, I wouldn't mind if Little One had the imagination of Anne Shirley or Amelie Poulain!

C-I can't wait to hear your stories about your little one. They come up with hilarious stuff! I hope Ellen likes Anne Shirley, too!