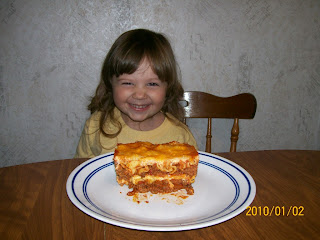 Per Ellen's pronunciation this is what we had for supper tonight. Actually I wanted to tell the tale about this particular dish. It's just something to blog about. Ellen wasn't supposed to be in this pic, but she inserted herself pretty handily into it, and since she is so cute I went ahead and took it. (Although it took about 3 shots to get a good one, she covers her mouth or her eyes when in front of a camera lately.)

A couple weeks ago I found a recipe for something called "French Dip Lasagna" which sounded really good; you use a carton of French Dip as a couple of the layers in it. I mentally made notes of the ingredients and got them, but then Christmas happened and I had to clean up the kitchen counter. Which meant I misplaced the magazine with the recipe. *sigh*

But I figured I'd just grab a different lasagna recipe and sort of follow it. Well, that was a good idea until I began assembling the ingredients. I had the meat sauce prepared and was working on the rest of the cheeses...etc. I reached for the box of lasagna noodles....

it was awfully light.

Yes. There was ONE lasagna noodle in the box. ONE! Can you believe that?!

Well, not to be denied this treat I just chucked curly noodles on instead of the lasagna...pasta is pasta. Right? You can see the curly noodles in the pic. They turned out nicely.

I never bother cooking the noodles by the way, I just chuck them on there "raw" as it were, and they always cook up just fine.

So, a couple of lessons learned. When making a particular dish, make sure you have ALL the ingredients on hand a week before you want to prepare it. And, if you don't, go ahead and improvise, you might surprise yourself.
Posted by Calfkeeper at 8:10 PM

Wow! I would have never been so brave! Nice job-looks great!

so did she the hole thing?

Thanks...it was pretty good. Ha! Ellen didn't eat much of it, just a few bites that I poked in her.