We were kind of wondering about my brother, but he did a great job of finding a wife...even if he did have to go to Japan to find her on a military base in Okinawa. She was teaching English over there. Over the years she has been a great support to me, to our family and of course a great wife to my brother and mother to their children.

My family in turn, yes, they were all wondering about me too. And what really gets my goat is they didn't even blink an eye...or at least not where I could see them do so...when I told them I was quitting my job, packing my bags, leaving them all behind and hoofing it to the Mid-West to marry some internet dude. I guess it all turned out well in the end though. And, look what my mother-in-law gave us yesterday: 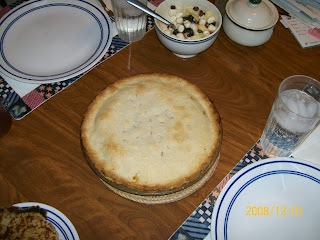 It's a turkey pie. She had lots of filling, she made two of them. And instead of putting it in the freezer she sent it up the road to us. Isn't that the best?!

Yes, my hubby's family has been very supportive over the past 4 years. As far as I know they didn't blink an eye when hubby told them he was getting married. Though MIL said she never thought he would marry. Ha. Anyway. They have helped us garden, rake and burn leaves, snap and can beans, given me recipes and plants and a place to sleep when we lost our power. Not mention babysitting. Of course they have their own reasons for doing that. Heh heh heh.

OK. It's almost bedtime. I'd better stop for now.
Posted by Calfkeeper at 8:01 PM

Oh, so you met your husband on the Internet? I had wondered how you met him, since you're from such a long distance away!

Well it was a shock to us, when we hear that he was getting married

we didn't think he wood get married!


oh and if mom~in~law has any more leftover she can send them our way
she is a very good cook! ;)