Tornadoes, Irises and a Cherry Tree

Yes, we are still here in Missouri...for now anyway. The tornadoes went south of us, thank God. But they are predicting more for tonight. Great! But we don't have anything to complain about in comparison to Myanmar and China.

Here is a pic of my irises. Two years ago I took a couple of the roots from a patch way down the road by the dry cow pasture and planted them in on of the garden beds. They didn't do well there, so the next year I put them in this stump out front. Last year they didn't bloom, but I was startled almost 2 weeks ago to see this display. This is actually out front; you can see our Mid-Am dairy sign swinging in the breeze there and some dogwoods blooming in the background. Very picturesque. 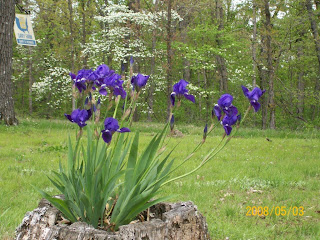 Sunday evening we had just finished milking at about 8 PM and had come in when we got a phone call; a neighbor told us one of his cherry trees had falled over the fence to our heifers in Windyville. He'd come home from the hospital and wasn't able to do anything about it. So off hubby went to take care of the problem, in the dark.

The issue with cherry trees and cattle is that when the leaves wilt they become toxic and will kill a cow within a few seconds of being ingested. Once dry it isn't a problem, just when the leaves are wilted.

Anyway, hubby comes back home (all was well, they'd nibbled on the fresh leaves, but no one was dead, so hubby blocked the area off 'til he can get a chance to go down there and fix the fence) and turns out in the dark he'd stepped in a large pie, of the more visceral nature, and had it all over his pants leg. He tried to clean it off with a paper towel and I told him it stunk really bad, but he just said I was imagining it. He put them (the pants) next to the bed to put on again in the morning (why get a clean pair mucked up during morning chores when you already have a mucked up pair to put on?), but 2 seconds later he was moving them to the back porch. Hehehehe!
Posted by Calfkeeper at 9:10 AM

Those Irises are gorgeous. To make them flower, plant them with the rhizome (the thick white root) on the surface, somewhere sunny. Getting that good and baked is what encourages them to flower.

My husband's uncle has a cattle ranch in N. Ca. We didn't know that cherry trees could be poisonous. Then again, they don't have cherry trees in N. Ca either.

Those Irises are beautiful! I love the colour!

Isn't it amazing what plants, fruits, etc can be poisonous to animals and we wouldn't have even expected it? Hubby was telling me about how some food that's fine for us to eat can make cattle bloat, have the runs, or even die!

Speaking of which, my MIL had an old red cow who was nearing her end. She was 18 years old, but a very good cow. She produced many good calves and she was an excellent mother. Anyway, a while ago she went off into the bush and was never to be seen again.

My MIL said that sometimes when an animal knows it is going to die, it will leave the herd and go off on its own to die. I was thinking of how sad that is.

Yesterday, while we were moving cattle into another pasture, Hubby found the old red cow. He told me he was glad that I wasn't near the swamp because I wouldn't have wanted to see her.

Oh, how do you cope with all the losses and death on the farm?? I know that whenever a new calf is born, it makes everything seem worthwhile, but I just need to figure out how I'm going to cope with the harsh parts of farming.

Oh, we have a set of twins (both girls!) and they are lovely! They're the tiniest of the bunch, but they are so pretty. They follow me everywhere. Hubby says not to get too attached because I know what happens come Fall. *sigh*

Would it be terrible if the beef farmer's wife were vegetarian again? LOL!

c-It is so hard when we lose an animal. I know how you feel. I don't think it's anything you can ever get used to. You just kind of grieve and then go on as well as you can.

The only other way to handle it is to just think of them as a business and not as individual personalities. It's hard too, but when you are running a business and you have employees; some of them quit, some you have to get rid of...no matter how much you like them. When you look at it in that light it makes more sense...not that it makes it any easier, of course.