Jalapeno and Cheese and High Water 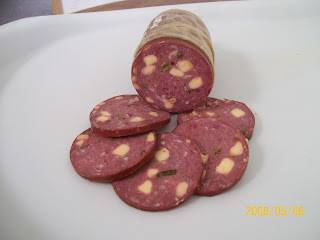 Here is a picture of one of the venison sausages sliced: surprise...it's jalapeno and cheese! They aren't labeled so dunno how many of the 6 sausages are this "flavor." We gave about 3 away I believe, so hope they like them!
Dairy news:
It has been raining here at least once a week the past month or so, which has kept the creek up fairly well. Yesterday hubby let cows go down into the creek bottoms; not knowing that it would rain most of the day. So last night during milking he was really late in calling me to come out to help finish up. I got out there and asked: Was the creek up? "Yes."
Were you able to get across it? "No."
Were the cows on the other side of the creek? "Yes, that's why I'm so late."
When the creek gets too high you can't get the 4-wheeler across, so you either have to use one of the tractors for round-up, get out your waders or just hope the cows come of their own volition and greed. He went down to where he could see them and called. He said about 15 came over initially. So he came up and milked them. Then he went back and another dozen had come over, so he milked them. Then he went back down and another handful had come across...so...well, you get the picture. That was how his evening went.
Posted by Calfkeeper at 2:15 PM

Wow! I can almost imagine what your poor hubby had to go through! Our cows went through bush and swamp (not where we were trying to get them to go!) and the poor little calves went following them. It was not fun!

The last few posts I wrote on my blog were farm related. I had you in mind when I blogged about moving cattle and fixing fence! ;)

Hope you, your hubby and adorable little one are doing well!