This past weekend, on Saturday, we went to the barbecue at above named company.  They are the ones hubby gets water well supplies from.  Every spring they have a barbecue with mounds and mounds of food and tons of prizes.  I think I have written about them before.  They have games for the kids, and for the ladies.  Then they have the big prize drawing at the end of the whole shindig.

Ellen looks forward to this every year.  She calls it the Cake Walk, because the first year we went they did have a cake walk there.

This year however, they did not have a cake walk, but had 3 of those inflatable party type games.  See below.  They also did face painting, or feathers in your hair.  Ellen opted for the feather.  See below.

She loved this baseball one.  The cone blew up a stream of air that would keep the little balls floating.  She was pretty good at giving them a whack.  She didn't make it into any of the holes in the back wall, but she didn't even realize that was what you were supposed to do.

This is Daddy; showing her the basics of the game. 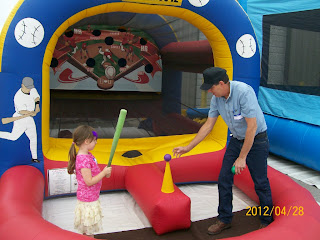 Now here she is trying it for herself:
(It always works better when you stick out your tongue a bit!  Ha.)
(Behind her you can see there's a basketball dealy.  On the other side of the baseball
one there's a bouncy house; Ellen would have none of it...AT ALL!) 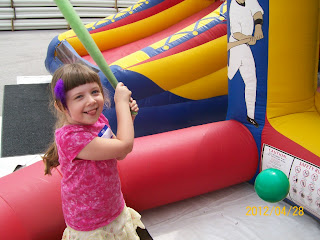 This year for the ladies they had Bingo.  Ellen and I played.  I won the imitation plant, Ellen won the little jewelry case.  Then they had the door prize drawings.  Ellen won a little canvas kid-sized fold out camp chair (I forgot to take a pic of it), I won nothing, and Hubby, Hubby the bah-humbug-anti-TV dude, WON the big screen TV!  The second to the last prize and he WON it.

What a HOOT!  I just laughed and laughed.

In the seven plus years we have been married we have never owned a television.  We don't really watch it.  Now we have one.  Ellen says she wants to watch her movies on it instead of on the computer.  We will have to figure out how to hook it all up.  Oh the joys of being blessed. 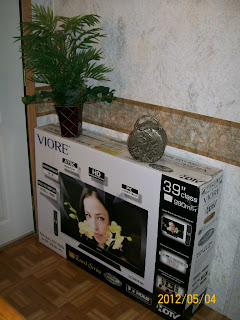 Posted by Calfkeeper at 3:08 PM

ya take the tv, out of the box, and plug it in. you will need rabbit ears for it too. :)