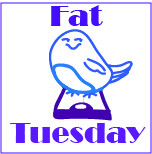 Yay me!  I HAVE been exercising most every day; at least 5 days per week; walking and weights.  I have been reading my Bible and praying-though once again, not as much as I ought.  And I have been doing much much better at avoiding sugar; at least for the past 3 days.  Ha.

On Saturday I had a bit of a shock.  I have been trying to do most of these things for the past month, the exercising part anyway.  But when I checked the scales on Sat I'd gained instead of lost!

AACCKK!!!!  (I would like to think it's because I've build up muscle, which weighs more than fat, but alas, I doubt that's the case.  Ha)

So, that was when I started recording what I eat, AND counting all the calories.  I am going ot have to find one of those websites where you can record what you eat and THEY will tabulate the calories.

Anyway.  On to my story; because I promised you stories to go along with these Fat Tuesday posts.

So the number one rule of thumb here on the dairy is that when it comes to exercise, regular chores do NOT count.  If regular chores counted as exercise, you (read: I) wouldn't be fat in the first place.

BUT, come gardening time I count it as exercise because it's not something I do year round.

So anyway.  Hubby was down at his mom's this morning and called me from there to see if I could come down and help ridge potatoes.  (This means he tilled between the rows and then you come along and pull the dirt up around the plant where the spuds will develop.)

YAY!  Some exercise!  Ellen and I went down there and I helped ridge potatoes. With 3 of us (Ellen helped rather halfheartedly for 3 minutes, then she sat on a bench and worked in one of her workbooks that she'd brought along.) working it only took about 1/2 hour to do 3 rows.

We'd just finished and were congratulating ourselves on a job well done, when Ellen piped up and said; "Look, look!  What's that?"

Crawling on the ground not 3 feet from her was a HUGE mole.  He was about to dive back under the ground when my husband took a few bouncing leaps with his long legs and landed on the top of the it just as it was about to escape.

Then, not one to pass up a learning moment; hubby picked up the dead mole (which was still intact, though thoroughly dead) and had a biology lesson with Ellen.  They looked at its weird pointy snout, its big shovel-like front feet and stubby tail.

Ellen was fascinated.  She has not yet learned to be grossed out by dead things and I am glad of that.  She might was well get used to the fact that animals die and not to be squeamish about it.

At any rate; as a footnote to that story; we are having an all out war on moles here; they are taking over everything.  And they eat our earthworms, we want our earthworms for our gardens.

That's all.  Happy Fat Tuesday-ing everyone!
Posted by Calfkeeper at 3:13 PM

glad to hear ya, still at it!

they are bad this way to !

Ew! I have never seen a mole, dead or alive. I plan to keep it that way!