Here are a few pictures from my walk the other day. It was nice to get out and get the cobwebs cleared out of my head. 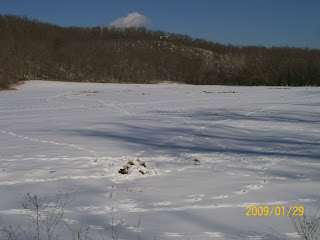 This first one is just a shot to remind me that I am not the only one who walks down in the creek bottoms; most of these tracks are either coyote, deer or turkey. It was interesting to see them all criss-crossing in the snow. 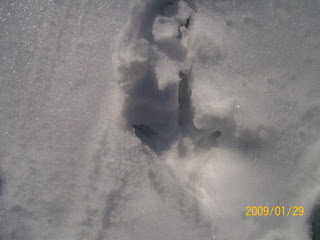 The second here is a turkey track up close. I didn't have the forethought to put my boot in the pic so you could get an idea of size, but rest assured, a big bird leaves a big track. I went down into the creek bed and walked along and kept seeing more and more turkey tracks that looked to me (a tracking neophyte) fairly fresh. I didn't go too far before I saw the whole flock take off running up the hill ahead of me; too far away and too quickly to get a picture of them. 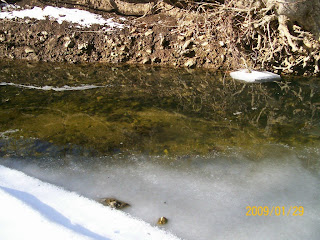 In the creek bed, to my surprise, I found standing water. This was the largest pool of it. All along I had been feeling sorry for the wildlife and wondering how they get water, but apparently that wasn't a concern. There were no tracks around this pool. There was one other smaller pool I saw before this one, I walked up to it, heard ominous creaking under the snow as I approached, at that point I fled, trying to do so very delicately. HA! 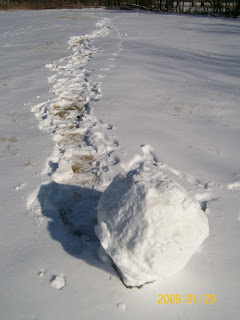 This final picture is just proof that 40-year-olds are still kids too. On my way back across the field I couldn't help but start a snowball and push it until it was killing my back to push it anymore. Then I just left it.

I didn't take a pic of any coyote tracks; they just look like dog tracks. But there was one spot where there was a scattering of them; more than one animal I presumed, along with a couple of patches of yellow snow. I wondered if they'd had a little meeting there.

Never fear; I neither sampled the yellow snow nor included it in the snowball. I wonder if they came along and piddled on it later that night. How insulting! Ha!
Posted by Calfkeeper at 1:16 PM

WAAAAYYYY too cold. And not enough time left to do so.

The pic of the snowball really messed with my eyes. I was looking at it, and I thought at first it was a snow angel, then I thought you'd fallen, because it looked like a depression in the snow. :D

We've had a few inches here just recently. I bet Ellen is loving it?

solomon-on second sight, I guess the snowball pic does mess with your eyes for a second. Didn't notice that at first.

Ellen still does't care for the snow; won't walk in it.