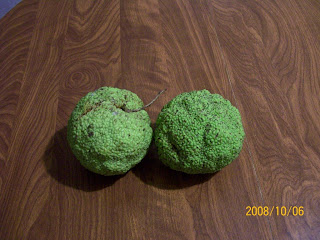 Hedge apples. I had never heard of hedge apples before I came here, but they are pretty common. They come from trees known as "Osage-orange". They are commonly used to repel insects, but it is said this is a myth. I dunno, I have never tried. These "apples" are sticky to the touch and are just plain weird. They aren't edible, you can find out more about them at this website.
Dairy News
There really isn't too much going on that is newsworthy on the dairy. Lately our new first calf heifers that come on line to milk have been pretty disappointing as far as production goes. Their udders are pretty much non-existent. Last night hubby said something to the effect that this last one was a dud. I had one of my rare insights; "Oh," said I, "she is a milk dud."
Bwa hahahaha! (OK, so you had to have been there to really appreciate it. Plus you have to know that a milk dud is a type of candy.)
Never mind.
One other time I had such an insight. Hubby got a John Bean pump to put on the well drill rig for pumping water into the hole as he drilled. He was pretty proud of his Bean pump, they are considered really high quality. It was red and he was thinking of painting it green to match the drill. I told him that'd be cute; a Green Bean pump. hehehe.
OK, I will stop now.
Posted by Calfkeeper at 12:39 PM

We only have one hedge tree on the place, and it's pretty pathetic. I wish we had more, because they make the best fence posts.

Those hedge apples are really cool. They look like galls of some kind.

donna-yes, husband has a few posts made from them, I believe. They really last.

solomon-they do look really cool. I wish they kept better, but they rot and turn brown and stinky.