It was a busy weekend. On Saturday Ellen and I went to the annual church hay ride and fish fry. I was hesitant to take her because I knew the ride would last forever, but it turned out to be fun; she enjoyed it. 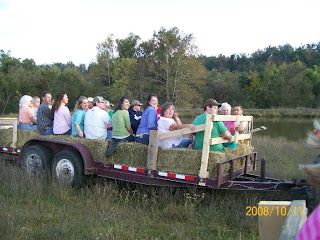 This has become more of a community event than a church event so there were quite a few people there, many of whom I did not know. There were 4 wagons of people, both kids and adults. What it amounted to was a tour of one church member's fields with various stops along the way to chat with Biblical characters.

The first stop was with Zacchaeus (or however you spell it, I always forget), perched on a limb. He told us about how he was inspired to repay all he had cheated from people, after he had an encounter with Jesus: 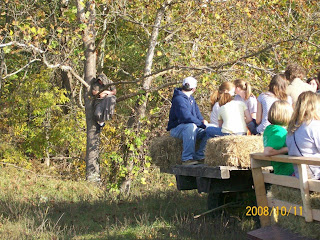 Then one of the stock ponds became the Nile River where we saw Moses in a basket by a clump of reeds. Taking his life in his hands the preacher (who did all of the interviewing with a portable microphone) braved the inflated plastic crocodiles to interview Mirriam, who was hidden in a clump of oak trees by the pon---excuse me, on the bank of the Nile. (The top picture was actually taken by the po---err..Nile, but the actual shot I got of Moses wasn't really flattering of one of the tractor drivers. Ha!)

Then I think we went a little further and had the tug of war with an ancient rope, but the rope broke and everyone fell, so next year's budget will include a new rope. The tug of war is supposed to represent the fight of the flesh and the spirit being waged in everyone's life.

After the botched spiritual battle, we headed off to one of the kids' fav spots; the pumpkin patch. This is where they all get out and pick their own pumpkin. Last year the coons ravaged the pumpkin patch and this year Farmer couldn't get them to grow very well, so for the past couple of years the hayride budget has had to include a few pumpkins. Here is Ellen with her pumpkin. This was all new to her, so note the thumb in her mouth, what she does when she is out of her element. (She had unthawed enough by this point to drop the dolly at least) 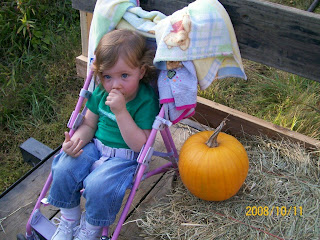 After the pumpkin patch we circled back around and found Balaam's Donkey, who was courteous enough to tell the story from her point of view. She was kind of persnickety though, she got really restless and jumpy and when Preacher asked her what was the matter she told him his cologne stunk, which got a good laugh. (Of course this was all set up with one of the teen girls in the front wagon on a separate microphone. Note the speaker and mic and script on the haybale.) 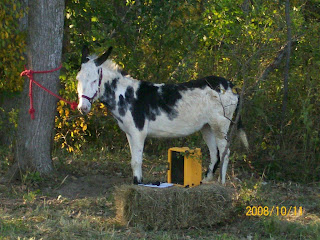 We finally got to the last part which was the story of the Prodigal Son, acted out by the Preacher himself, it is his favorite story from the Bible. This stop included a corral of 3-4 pigs. Then they called out certain age groups of the kids and had them go in and chase one pig around and each child got to catch it and pick it up. They used a different pig for each group of kids. This was a popular stop, though quite a few kids didn't want to get in with the pigs. (I don't blame them.) 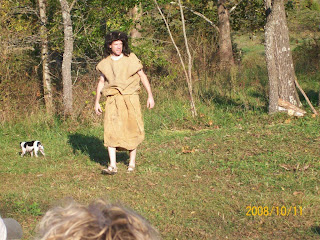 The Prodigal Son story was acted out in two locations. At the first stop the kids were to pursuade him to go back home to his father. At the second stop he came running in out of the trees to talk to his father, who told him he would put a robe on his shoulders and go kill the fatted catfish....at which point we FINALLY went down the hill to the fish fry.

I should have got a picture of the table (or actually it was a wagon) of food. It was amazing. At any rate, it was quite the adventure. Ellen and I brought back a few mosquite bites, but it was worth it.
Posted by Calfkeeper at 12:09 PM

It certainly looks like you had a fun time.


sorry i missed it

Wow this looks such fun.

Yes everyone, it certainly was fun.

And yes, jel, S looks good in a dress. He ought to preach in a kilt someday! HA.