Playing with your food 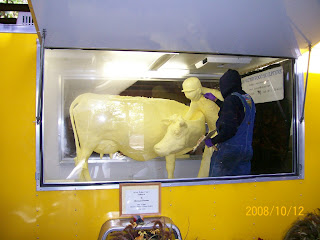 You probably thought when you read the title that I was going to blog about Ellen playing with her food. Actually, at this point, she isn't too bad about doing such. She either pokes it in her mouth or leaves it alone. Or, she chucks her plate on the floor when she's through, if we aren't quick enough to take it when she announces; "Done!"

No. I took the above photo during a trip down to Silver Dollar City near Branson, Missouri. The theme was some kind of salute to farmers or agriculture. In one building we found this; a man in a refrigerated box carving a cow and a farmer from butter. While we were standing there watching this, two thoughts came to my mind; "it must be so cold in there that the dude's hands must get stiff," and "what a sign of decadence; only in America would we play with our food like this."


Hubby also had a couple of thoughts; "there must be a metal superstructure under all that butter or the cows spindly legs would collapse (we later found out this is true)" and, "that butter man is standing in a really dangerous place; the cow could swing her head around and send him for a loop." The second thought obviously comes from a man who has worked with cows for most of his adult life. No matter how tame they are you generally want to take care to stay out of range of their heads, she could swing it around to bite at a fly on her back and if you were in the way you'd get a good kawallop; their skulls are really heavy.

Here's another country saying that MIL picked up in the dr waiting room the other day, it was in a conversation about the upcoming presidential election: "It's like shearing a sow; a lot of noise and not much wool." We all thought that was pretty good.

thats cool or should I say cold :)

Good luck for NaBloPoMo. Have you set out a list of topics you're going to blog about?

No, I prefer to blog by the seat of my pants, solomon. Ha. I am not organized enough to have a list of topics, though I have an idea of a couple things I want to do with the blog.