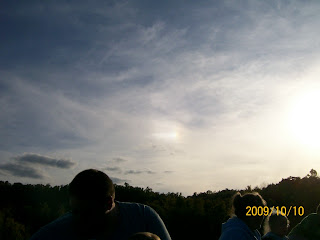 While we were on the hayride Saturday evening we were happily putt-putting along through the pasture when someone pointed out to me what was happening with the sun.

To the left of the setting sun appeared a seemingly second sun. Sometimes they will occur on both sides of the sun. This phenomena is called a "sundog" and is a great forecaster of rain. Somehow the moisture in the atmosphere causes a sundog to occur.

But, sure enough, in less than 36 hours it was raining. And it has been overcast here ever since. Not to mention being drizzly and wet as well. HA!
Posted by Calfkeeper at 1:25 PM