A Pic from the Recent Past 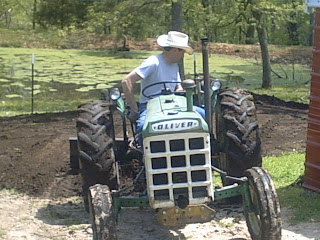 Here is a picture I took back not long after we were married. We were doing some landscaping out back here and hubby was using the Oliver tractor to blade out a pile of dirt. So this is what it looked like before.

I haven't taken a pic of it since he got it turned over. But this morning I heard it chugging up the hill, a little the worse for wear, but still going. He'd taken the hood off of it, and the front white grill, along with the exhaust pipe. As you might imagine it leaked quite a bit of fluids all over, so when he initially tried to start it there was smoke and it wouldn't fire straight off. He took one spark plug out, tried it again and said a jet of flame shot out to the side-a combo of gas and oil in it. He hopped off and blew on it to get it out. *sigh* But then it did fine, except for a bit more smoking. Amazingly enough neither of the two lights were broken or even bent at all. You can just barely see them mounted on either side just over the back wheels.