Pregnant on the Dairy 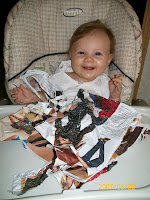 (First off...thank you to everyone who has visited and commented. I appreciate it so much. Someone asked for more about the baby and DH. I will start with the beginning of baby and go from there...ha. You will get some of DH in the story. Usually I write these first in Word and go back and edit, but I am just going to put this in off the top of my head and maybe edit later. Here goes...)

The whole thing began with DH asking me a question: "Had any deep thoughts lately?" I told him we had best be thinking about whether we wanted to have a baby or not because the biological clock was ticking pretty loudly. This threw him for a loop. See, he was 47 at the time and I was 37. We had only been married for just over a year and THAT was a huge leap for both of us since we neither had been married before. At age 44 his sister was the youngest in his family and so he had no exposure to babies and their ilk. He wasn't sure what to say. But suffice it to say and to make a long story short...the deed was done and I found out I was pregnant back in early summer of '06.

I had never connected the dots between pregnancy and living on a dairy, but it wasn't long before the whole picture presented itself! It was early one morning when I was doing chores that it hit; hard! A cow back in the holding corral did a wee-wee. The smell was so strong that suddenly I found myself bent over holding onto a tree and hurling up my toenails. It only got worse from there. If you have ever visited a dairy you know that cows do much worse than pee. My husband got so he knew what was going on when he heard the barn door slamming. It was a wonder I didn't kill that tree. But maybe that's why it had such a great acorn harvest the next fall.

For the 1st 5 months of the pregnancy I was so nauseous that any strong smell would set me off. Just the smell of the fresh milk as I filled the bottles would gag me. Calf poo, fresh mown grass, warm fresh milk, the stupid skunk some stupid heifer decided to chase, the algae smell from the ponds...all the things I never thought about before, it's a good thing our dairy is so wooded. And whoever called it "morning sickness" really missed it by a mile. For me it was 24 hours a day. I had to leave my window shut at night because the wind would blow in some of the nastier dairy perfumes. Even then sometimes I'd roll over in bed at 11 PM and have to run to the restroom to hurl.

My husband was a never ending source of fun. Keep in mind he was totally new to any of this pregnancy or baby stuff. I didn't really get that big, but one of his comments was: "It's hard trying to keep pants up on a ball isn't it?" *sigh* He was always comparing cows and humans, too. Like: "Why is it you never see cows out hurling behind trees and bushes?" Dunno, that's a good question. I wanted to know that one myself. They seem to have an easy time of it.

That nine months seemed to last forever. Most of my friends had their first babies 2 to 3 weeks early; not me. I tried to prolong the discomfort for as long as possible. Finally I had to be induced. Miss Ellen came along in Feb of 07.

She was worth it all.

Posted by Calfkeeper at 8:51 AM

I thought the "morning sickness" would never end myself...24 hours in the day was morning....great description and I'm glad you thought it was worth it with your Ellen. I did too.

Hello! I found you in the comment section of Dawn's blog. Since dairy cows are one of the loves of my life, and since I live in Missouri... KC area... I decided to check you out! I milked cows for 25 years of my life (not a commercial operation, just one to five cows at different times, and raised bobbies with the milk).

Hi! I came over from Jel's place.
Wellcome to blog-land!!

thanks for stopping by,

didn't know ya had a cents of humor this time of day! :)

She's adorable!!! Hubby and I are sort of newly married and I can't imagine what it will be like being pregnant on the farm! LOL! I'm a city girl, so we'll see how this goes! ;)

Anonymous said...
This comment has been removed by a blog administrator.
November 7, 2009 at 7:59 PM