A couple of days ago; Monday, I believe, Bella and  I once again forsook civilization and betook ourselves off of the ridge down to the creek.  It had rained a bit over the weekend, so it was up some, rushing along. 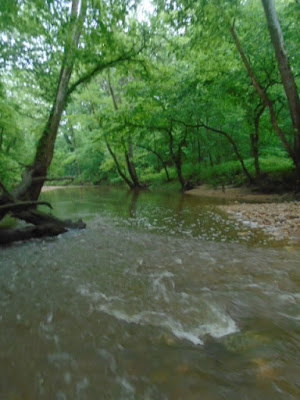 It was even foaming in spots.  I'd always thought when writers spoke of "foaming" waters they were being artistic in their speech. 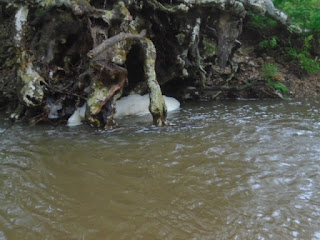 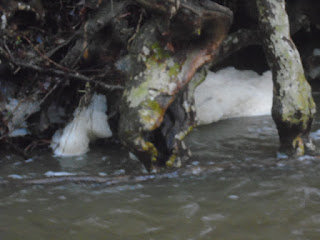 When the creek gets with it and rushes and tumbles along, it DOES churn up foam in the tree roots.

Bella wasn't too sure of the creek's being up and in a hurry.  She isn't as shy of water as she used to be but it took her a couple of tries before she made it to the other side.  She'd go in up to her elbows-like, then turn back. 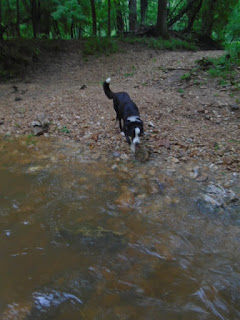 But she finally braved it and took off.   She was quite proud of herself when she made it to the other side, the water had actually pushed her off course a foot or two. 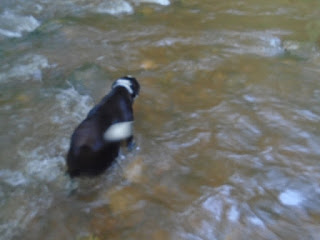 We went upstream a couple hundred yards or so.  The water was much deeper there and flowed smoother, reflecting the green of the trees. 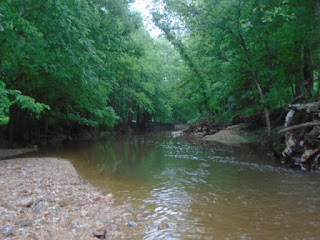 And in the shallows along the edges of the creek there are teeny fish, and tadpoles by the hundreds, if not by the thousands.  This one thought he was disguised: 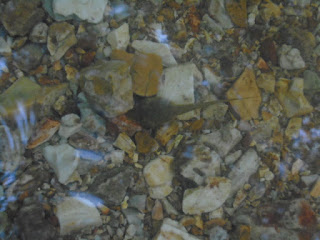 I walked out into the rapids part.  It was so hot and steamy I was tempted to take a dip, but the current was too strong yet, and I wasn't sure if there wouldn't be higher water on its way.  So I just stood there in my boots and enjoyed the scenery and peace that comes from being down there. 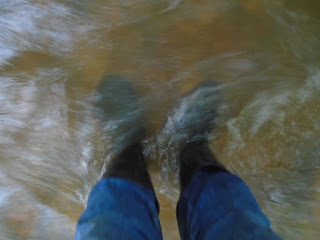 It was a good walk.

Posted by Calfkeeper at 5:25 PM