Last Tuesday, the 5th, Gary got this bizarre call from the in-laws down the road.

"Come down here and see what you can do, there's a calf with a bucket on her head!"

Gary came up to the house from the barn to ask me to go see about her.

Um, yes.  There she was in the field next to the in-laws place; with a bucket on her head in very truth. 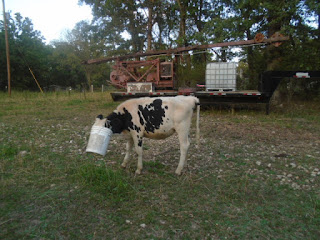 How in heaven's name did she get a bucket on her head?

Well you may ask.

We only have a faint idea of where said bucket came from.

Many years ago, like maybe 7-9 yrs, we had a calf out in that pasture that had some sort of problem.  I vaguely remember toting water or feed to her in bucket.  All I can figure is that one of those water buckets must have been abandoned out there.

Heifer 231 found it and apparently did more exploring than was strictly necessary.  She could see a bit over the rim if she held her head just right so she wasn't easy to approach. But I followed her round and round a few times and managed to get hold of the top edge of the bucket.  She jerked away of course, and since the bucket was super brittle it split it in several places lengthwise.

She ran into a tree and split it a bit more; but then she holed up in a thicket and I couldn't get to her.  So, as it was getting dark, I just left her there.

By the next morning she was free!  I was very thankful of that, too! 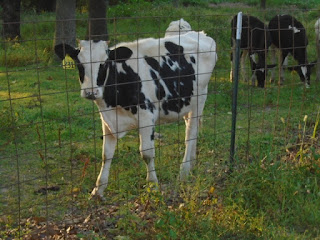 Posted by Calfkeeper at 5:57 PM